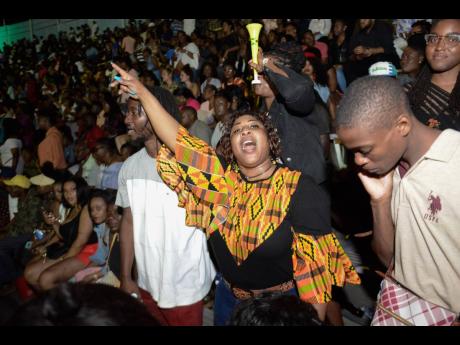 Reports of heavily booked hotels and a surge in motor vehicle rentals were on the tips of many Kingstonians’ tongues last weekend.

More than the euphoric welcome back of Buju Banton to the performance arena, the excitement surrounding the historic first step of the reggae artiste’s Long Walk to Freedom tour indicated that the idea of Kingston as a musical, cultural Mecca can become a sustainable reality.

“There are big plans for Kingston – structural development for both downtown and midtown. Kingston is really set to be the big capital for business and culture in the Caribbean,” Minister of Culture, Gender, Entertainment and Sport Olivia ‘Babsy’ Grange told The Gleaner.

Moments before the Gargamel hit the stage, the minister expressed that the event had put another mark on reggae music and on the city itself. “Tonight is just unbelievable. It has further enhanced Kingston as the cultural capital of the Caribbean,” she said.

As such, Grange announced that plans are under way to develop proper infrastructure to support the performing arts. “We are moving forward in doing a performing, arts centre in Kingston, and also in Montego Bay,” Grange said. She explained that the Montego Bay centre will have a seating capacity of approximately 1,000.

“In Kingston, we’re gonna have at least 5,000 seats – and it will be modular, so you can have small events and large events,” she said. Grange also made mention of the pending expansion of the National Stadium, with plans to add 10,000 seats, most of which will be covered. Renovations will include a royal box and a state-of-the-art anti-doping facility.

“We’re going to have small banquet rooms so that the facility here will not just be used when we do a big event,” the minister said.

Besides the annual Grand Gala, the National Stadium is rarely utilised as an entertainment venue. “The only other big events that have completely filled the stadium and we had to control traffic and all that is the Grand Gala and Boys and Girls’ Champs. So, we are actually moving quickly to get to the stage where we can come up with designs and all of that,” Grange added.