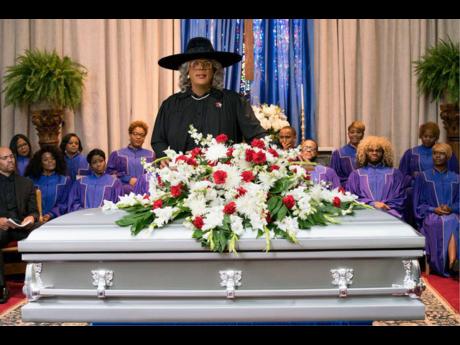 A scene from Tyler Perry’s comedy, ‘A Madea Family Funeral’.

For a moment, the wool was pulled over my eyes. The characters on screen reveal their connection to one another in subtle ways, and wonderfully sow the seeds for what will be future familial conflict. It seems Tyler Perry has rediscovered the relative quality of his earlier films. There is mention of the titular Madea. One character even dreads her arrival for the evening’s festivities, to which another responds, “Yeah, they might be a lot, but they’re family. And they’re funny!” It almost feels like the self-awareness one would need to send off an iconic character in her supposed last film.

Too bad it only lasted for a moment. After only four minutes, Tyler Perry’s A Madea Family Funeral reveals just what kind of movie it’s going to be. It does this with the introduction of Heathrow, the brother of Madea, also played by Tyler Perry. Heathrow is a legless paraplegic, with one upper tooth, and speaks using an electrolarynx. He’s obnoxious and serves only as a wild card to make the other characters react. That’s the balance of the film. At one point, it provides a decent family drama, only to be interrupted by a disruptive element, typically played by Tyler Perry.

Then there are the moments that are truly a chore to watch. Especially for this near two-hour film. The scenes with Madea, Joe, Hattie, and Bam, sitting around bantering off one another, are borderline excruciating. The dialogue itself is repetitive, but the truly insufferable element is the voice of Patrice Lovely’s Hattie, which makes nails on a chalkboard sound melodic. Of the film’s one-hour-and-50-minute runtime, it feels as though these scenes collectively make up three hours.

It’s not as though the rest of the film is much better, but it’s the lesser of two evils. Given the choice between Tyler Perry’s take on the Black Lives Matter movement, which is handled abhorrently in one scene, I would much rather watch the rote family drama. To give credit where it’s due, Perry’s take on sitting in a black funeral is spot on and is truly the only inspired commentary in the entire film.

For all its lazy writing, bad acting and truly insufferable characters, a few shining moments keep it from being an abomination. As someone who sat through Boo, and Boo 2, A Madea Family Funeral was a movie to die for.