Bunny Wailer goes to Cuba for treatment; no shows before 2020 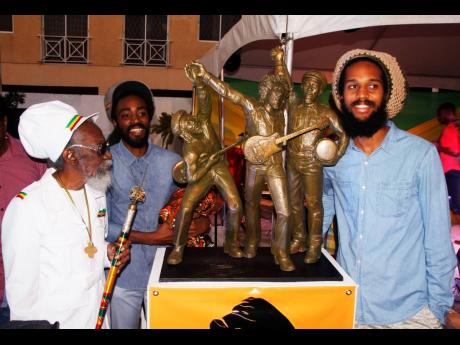 Elder statesman in reggae music Bunny Wailer is still recuperating from a stroke and will not be ready to take the stage until 2020. Jah B, as the only living member of the iconic Wailer is also called, recently returned from a five-week stint in Cuba, where he underwent rehabilitative treatment.

Describing the treatment there as “excellent”, his manager, Maxine Stowe, revealed that although Bunny Wailer’s condition has improved since the minor stroke in October last year, “we are not putting him under any stress”, therefore, there are no plans for him to perform this year.

“The trip to Cuba was excellent, and Jah B’s rehabilitation is coming along fine. He is talking, walking, and in good shape. He will not be taking bookings now, but he has a lot to keep him occupied,” Stowe told The Gleaner.

Elaborating, Stowe revealed that the Wailer is currently very busy with several legacy projects, among them a project in Nine Miles, St Ann, and the commissioning of the Wailers statue, which is being done through his foundation. The statue will be placed at Bournemouth in the parish.

He is also spending time at his farm, and there are plans afoot to write a book.

“Right now, he is very focused on building out a space in Nine Miles, the birthplace of the Wailers. Bunny’s father played a central role in the development of the group, and these are the things that must be recorded. He (Bunny Wailer’s father) had a daughter, Pearl, with Bob’s (Marley) mother, Mrs Booker, so that family aspect is also part of the whole history,” Stowe said.

Stowe stated that the Nine Miles project involves community development and that they are in discussion with TPDCo to see how best it can assist with this venture. Although Bunny Wailer has set up a museum at his house on Darley Street in St Andrew, he wants to set up a permanent one in Nine Miles.

“The museum at the house is open to the public by appointment, but that is still in a residential area, so the plan is to build a dedicated structure in Nine Miles,” Stowe said.

An important component of Bunny Walier’s legacy project is ensuring that there are no issues that will prevent his estate from being handled according to his precise wishes.

“Both Peter and Bob died intestate, and we all know the problems that arose because of that. And, take for example the case of Clement ‘Sir Coxsone’ Dodd, even though he left a will, the estate still ended up in the hands of the administrator general,” Stowe said of the legendary sound system owner and Studio One producer, who was also her uncle.

“For our part, we are doing everything to avoid that kind of situation because when these things happen, it retards the growth, and whatever they have constructed, becomes deconstructed. Eventually, the estate ends up in the hands of the same government that you were fighting against,” Stowe lamented.