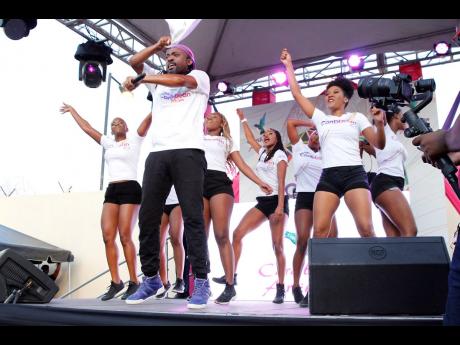 The sounds of a steel band playing Latin-pop fusions like Despacito, soca tracks such as I Dare You and dancehall songs including Bam Bam and Bruk Off Yuh Back, could be heard from a distance, as Caribbean Airlines hosted the Jamaica leg of its new campaign, The Caribbean Identity, last Friday, at its Old Hope Road office in St Andrew.

Jamaica’s Silverbirds Steel Orchestra served as a teaser for the entertainment that package that unfolded when the airline christened a Pop up Lyme, which lasted close to three hours on the busy Friday afternoon.

Senior marketing executive, Alicia Cabrera, says the campaign aims to celebrate the authenticity of the region’s islands and their individual cultures which all come together to create one Caribbean Identity.

“It is about the Caribbean islands being able to express themselves in their own unique way and becoming one; we are here to represent the best of the Caribbean as the various elements of each island come together to translate it as one love,” Cabrera told The Gleaner.

In an effort to spread the message, Caribbean Airlines has expanded the scope to support the initiatives of a diverse list of entities ranging from sports through to entertainment. In addition to being the official airlines for Reggae Sumfest, the sponsorships provided by Caribbean Airlines also include the Reggae Girlz and ISSA Boys and Girls Championships.

The airline’s chief executive officer, Garvin Medera, in delivering his remarks at the launch said, “The Caribbean Airlines connection with Jamaica and the entire region goes beyond thousands of people served daily.

It speaks proudly and loudly through the vibrancy of our cultures, the energy of our music, the splendour of our landscapes and of course the human heart of our people that is why for 2019 our core message will be centred on the Caribbean identity.”

The afternoon’s entertainment line-up continued with Ravers Clavers lead man Ding Dong and Bravo Ravers, whose voices deejaying dancehall hits Flairy and Fling Yuh Shoulder pulled even more persons off the street to dance their way into the parking lot.

With the upcoming carnival season, the airlines is offering passengers travelling between Kingston, Jamaica and New York the opportunity to earn triple miles and get closer to a free Caribbean Miles ticket and get two bags free with an upgrade to Caribbean Plus. Some guests even won tickets to fly free.

Speaking to The Gleaner, soca artiste Machel Montano said, “With Caribbean Integration happening on an economic level, it’s no denying that it is also occurring on the cultural and creative level of the people in terms of all the diverse entities that brings us together.”

Still recovering from effects of performing for days in Trinidad and Tobago’s Carnival celebration, the King of Soca joined the dancehall duo on stage even as persons pushed down the barriers to dance on stage with the entertainers.