Anthony B explores love and romance in new book 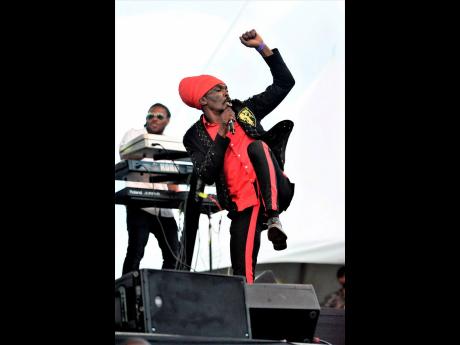 Reggae artiste Anthony B is so excited about his latest project that he is doing somersaults. The fire-chanting Rastafarian singer has written a book, and it has nothing to do with Rasta, reggae, roots or weed. It’s all about romance. In fact, this ode to love is titillatingly titled Secrets to A Man’s Heart.

This self-help book focusing on love and relationships, was five years in the making, and April 12 will see the singjay making his authorial début. The e-novel will be released for Kindle and the paperback will be available on Amazon.

“I really feel excited about this,” Keith ‘Anthony B’ Blair told The Gleaner. The book is all written by me, but of course, I worked with an excellent editor who has done justice to it,” he said.

Blair said he spent many late nights in hotel rooms putting Secrets to A Man’s Heart together, and he “spoke to many women, getting their views on various topics. Most of the times they didn’t even know that they were being interviewed.”

Referring to the work as “the woman’s Bible to romance,” he said that he was motivated to write the book because he feels it is important for women to hear certain things from a man’s perspective, “so that they can better understand the male psyche.”

“I am a revolutionary, and if I take time out to write this, then it must be important. I feel it from my heart that this is something that should be done.”

Actually, this is not the first time that the Fire Pon Rome singjay is caressing a woman lyrically. When he made a departure from his usual consciousness-riddled lyrics in 2009 and released the single Tease Her, it was certainly a potent revelation of a side of him that could very well have set the stage for his latest project. Tease Her was, in essence, a mini instructional manual on how to please a woman.

Anthony B is clearly proud of his love 101 effort and he feels that the positive feedback is real, rather than a mere massage of the ego. For example, the editor has told him that Secrets to A Man’s Heart is a must-buy for her.

“Can you imagine, she is the editor and she could easily get a copy for free, but she is buying it? And she sent me a receipt to show that she has pre-ordered her copy. I have a friend in Italy who sent me his two receipts, because he has ordered one for his wife and another for himself,” he said.

In the promo on Amazon, Blair says, ”A woman loves when the man she loves tells her how much he loves and appreciates her, so my advice to my woman is, let me teach you the ways to truly win a man’s heart. The secret to a man’s heart can be learned by first doing seven simple steps. Follow these seven steps, and you will never have to think about your man ever lying again.”

In his other life, music, Anthony B has a new album set for release in the summer. The 19-track project, titled King In my Castle, is one which is close to his heart and he has been working on it for one year.

“This feels like when I was doing my first album. This is to empower the youth, to let them know that they must not let anybody push them around,” he said

Also on his agenda for 2019 is a world tour, which is scheduled to take place from June to October. However, on March 31, he will be celebrating his birthday with a big bash in Berlin, Germany. Confirmed for the tour so far are: Malta, where he will perform for the first time, the Reunion Islands, Austria, Germany, France, Sweden, China, Japan, India, Israel, Canada, the US, and Trinidad & Tobago.