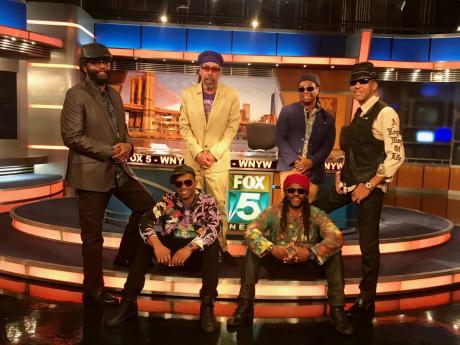 After four decades in the music industry, internationally renowned reggae band Third World is still in the business of setting trends and breaking new ground. Having realised how rapidly the reggae scene has been growing in Hawaii, the group decided to tap into that market and has collaborated with Polynesian reggae act Fiji on the remix of their latest single, Loving You Is Easy.

Speaking with The Gleaner about the collaboration, band member Stephen ‘Cat’ Coore said that Third World is keen on entering new spaces. “The whole Polynesian reggae thing happening now is very, very big. Fiji was born in Fiji but he grew up in Hawaii, and he’s one of the premier Polynesian reggae artistes. It’s pleasing to know that people on that side of the world have taken on to our music the way they have. J Boog and Fiji are very very big over there in Hawaii. I can tell you, their following is hundreds of thousands of people. You only have to look on their social media pages to see how huge they really are,” he said.

“Damian (Marley, the producer) has always advised us that he thought that was a market we could get into. He wants us to break our music to a wider audience and one that is very receptive to what Jamaican music is about. And right now, Hawaii has definitely become one of those spaces. They love reggae music so much that they even have something there called Jawaiian music, which is a mixture of Hawaiian and reggae. It’s fabulous to see what’s happening over there and we figured that if we could get one person who is in that diaspora to be on one of our songs, it would really be great somehow, and so that’s exactly what we did.”

Coore added that the band’s interest in working with Fiji also had a lot to do with the artiste’s immense talent. “Fiji is an incredibly talented artiste. He doesn’t only do reggae, but he also does hip hop, R & B and jazz. He’s a rounded talent, whose love for the music made it easy for us to work with,” he said. “We’re happy to have some energy down there in Hawaii, but we’re even happier that we shared in the moment with an incredibly talented artiste. He has an remarkable personality and a captivating energy.”

Coore said that since the song was released, it has been getting some positive feedback. “This remake with Fiji has been doing well, I must say. It’s number-one on Richie B’s reggae chart and that’s not just Jamaica, but Holland as well. We are very happy about that,” he said.

“I wouldn’t say we’re surprised by how well it’s been doing. What I will say is that it’s very pleasing. I’m very interested to see what’s going to be the way forward in this market now that we’re in. We keep hearing about how well we’re doing in Europe and America, but this is a growing market and I want to see how far the song goes in the Polynesian realm.”

Loving You Is Easy is the second single off Third World’s soon-to-be-released album, which is produced by Damian ‘Jr Gong’ Marley. Coore said the album, which is slated for release in the next two months, is a testament to hard work and dedication. “Jr Gong is a perfectionist. A lot of the stuff that we did, we went back to the drawing board, we re-did some, we upgraded some, and so the process has been long, but it’s been worth it. Working with him has been a pleasure,” he said, “I don’t want to say what our expectations are for the album, because how well it does is really up to the people. We like to put our best into the work and just leave the rest to the listeners.”