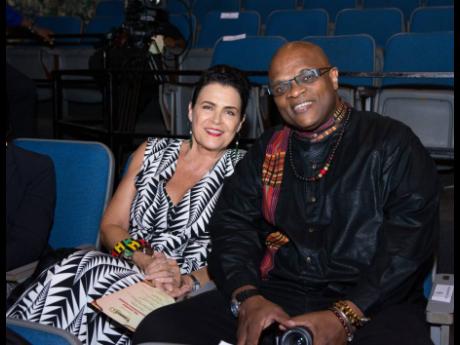 A five-day exhibition of the works of late cultural practitioner Aston Cooke was mounted on Monday at the Louise Bennett Garden Theatre on Hope Road, St Andrew. Spearheaded by the Jamaica Cultural Development Commission (JCDC), of which he was a former board chairman, and also a board member, the project showcases the extensive body of work that defined the man.

A condolence book has also been opened in the auditorium of his alma mater – Wolmer’s Boys’ School, and persons are being encouraged to sign prior to Saturday’s service of thanksgiving at the auditorium, scheduled to start at 10 a.m.

Referring to Cooke as her “beloved friend”, JCDC Executive Director, Mexine Bissasor, told The Gleaner that in the aftermath of his passing, persons were sharing Cooke’s work on social media, and many were surprised at the numerous projects that he had created or had been involved in. As a way of honouring him, it was decided to showcase his works in a meaningful way.

“It is ‘Reflecting Aston’, the man, the person. He is Mr Theatre. He’s Mr Photography. So it is visual, print and film. Initially, when we started sharing on social media, persons were like, ‘he did that because there are just so many things that Aston did. We have therefore compiled his works, and it’s almost like a museum,” Bissasor said.

“We want people to come and look and take in the kind of person Aston Cooke was. He was such a gentle soul,” she added.

Bissasor says that the 61-year-old, whose passion for theatre and all things cultural was unsurpassed, was an excellent source of reference and their conversations were always meaningful.

“We served on two commissions together, and Aston would always guide me and offer useful advice. Two days before his transition, he called me and we had one such conversation. I really learnt a lot from him. It was never ever about gossiping,” she said.

Bissasor recalled Cooke’s sense of humour and shared that he called her Aunty Zoso.’ “It was a joke between us that I always wanted to leave meetings on time in order to drive back to MoBay.” According to ‘Aunty Zoso, Friday will be what she calls “the big brouhaha” at Wolmer’s, from 7 p.m. until midnight.

“It will be the nine-night, and there will be the drumming and kumina and all these cultural things that he liked.”

Then, after the sounds of the drums have died, Cooke’s family and friends will gather at his beloved alma mater to pay their final respects to the man affectionately called ‘Cookie’.