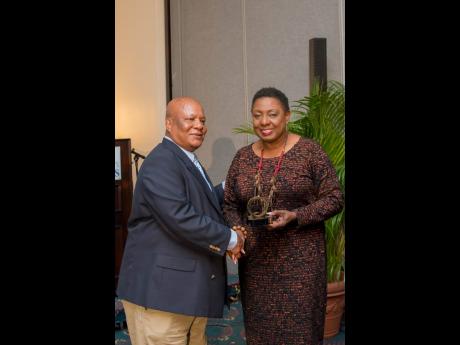 The handover ceremony of the Q Awards to the Government of Jamaica, through the National Library, took place at The Jamaica Pegasus hotel’s Negril Suite last Thursday. The awards, which are presented annually by Q Magazine to outstanding entities and/or individuals for distinguished services to music, saw Trojan Records receiving the main prize for their 50 years of outstanding contribution to recording, promotion, marketing, distribution and dissemination of Jamaican recordings in Europe. The National Library of Jamaica, an agency of the Ministry of Culture, Gender, Entertainment and Sport, facilitated the ceremony and a private screening of Rude Boy: The Story of Trojan at the event.

Trojan’s surviving representative, Anthony ‘Chips’ Richards – the man currently doing the legwork in the UK to perpetuate reggae’s legacy, was entrusted with the enviable privilege of accepting the award on behalf of Trojan Records.

Richards saw it fit to hand over the award to the Jamaican Government, where it would not only be safe, but could be put on display, among other memorabilia at the National Library of Jamaica, for viewing by future generations. He said, “When you give it to the country, and it passes from generation to generation, you can see that it is a real representative of Jamaican music.”

The handover ceremony featured addresses by Joy Douglas, chairman of the board of management, National Library of Jamaica; Beverley Lashley, national librarian; and Olivia Grange, minister of culture, gender, entertainment and sport. Douglas emphasised the importance of maintaining the link between Jamaica and ‘the overseas happenings’, and urged the audience to send whatever memorabilia they can afford to the library.

Grange, who accepted the award on behalf of the Government of Jamaica, said that it was a special day for her when she can celebrate the vibrancy of Jamaican music. Lashley spoke of the creation of a database to preserve the country’s musical legacy. She said, “We are elated that such a prestigious award has come home to Jamaica where it naturally belongs. Jamaica is the home of reggae, and the fact that Trojan Records has deemed it fit to hand over this award to the nation speaks volumes. Our people need to recognise that archiving is a gift from one generation to the next, and the only way we can know about our ancestors is if the information is documented. So this present generation need to document and archive their history, then pass on these documents, pictures, posters, films, music to the National Library of Jamaica, where we will preserve and make accessible our cultural heritage for future generations.”