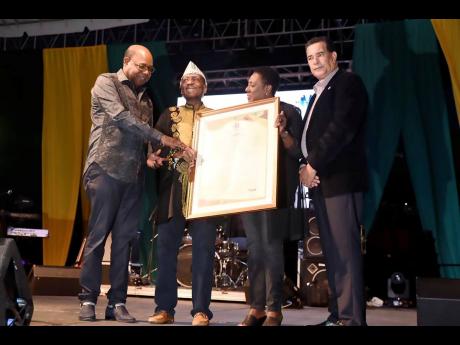 On Thursday, Grammy awardee and Rock and Roll Hall of Fame inductee James ‘Jimmy Cliff’ Chambers, OM, had more accolades bestowed on him with the renaming of Gloucester Avenue in Montego Bay, St James, to Jimmy Cliff Boulevard in honour of the reggae icon.

“There is no question regarding Jimmy Cliff’s international appeal, and with that in mind, I am of the opinion that this renaming will bring new energies and new life to this Hip Strip (the popular name for the former Gloucester Avenue),” Mayor of Montego Bay Homer Davis said while addressing the audience at the unveiling of the sign at the Old Hospital Park in Montego Bay.

Davis added that millions of international visitors will now be able to recognise the name ‘Jimmy Cliff’.

“Visitors to the island will now be able to identify with the name ‘Jimmy Cliff’, a name which is etched among some of the greatest musicians of all time in the Rock and Roll Hall of Fame,” said Davis.

Chambers, who was born in Somerton district in the parish, skyrocketed to popularity during the ’60s and ’70s with hits such as Many Rivers to Cross, Wonderful World, Beautiful People, and his rendition of Johny Nash’s I Can See Clearly Now and also showed his acting prowess in the iconic 1972 film The Harder They Come.

Speaking briefly during Thursday’s ceremony, Chambers said, “It felt really good to be honoured in the mother country (Africa), but to be honoured here in the parish of St James, where I was born, I thank you very much, and blessed love.”

Culture and Entertainment Minister Olivia ‘Babsy’ Grange stated, “Today, we pay homage to a musical giant in declaring the new Jimmy Cliff Boulevard in recognition and celebration of a musical genius whose creative imagination and forceful character have brought fame not only to himself but to Montego Bay, St James, western Jamaica, and to Jamaica, land we love.”

The minister declared that she would like to see more homage paid to the reggae singer.

“I would like to see a statue of Jimmy Cliff in the heart of Montego Bay,” she told reporters at the ceremony.

Grange also made a case for more monuments “so that future generations can recognise and look at those monuments as inspiration”.

“We have commissioned and mounted statues of our athletes, we have mounted, in treating with our culture, a statue of Louise [Bennett-Coverley], and so there will be many more statues,” she promised.

The Ministry of Tourism has also announced plans for further development surrounding Cliff’s birthplace. In addition to road rehabilitation, there will be the building of a museum and the restoration of the waterfall in the community which Cliff frequented.