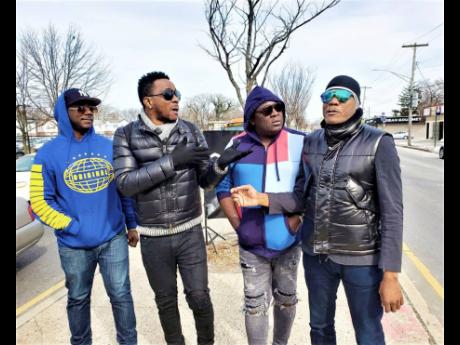 Nineties dancehall entertainers Errol ‘Jigsy’ King, Mr Easy, Mega Banton, and Lushy Banton will soon embark on a city-hopping tour across the eastern American states. The deejays are kicking things off on Memorial Day weekend in May, in North and South Carolina, before heading to Pennsylvania and New York on June 7 and 8.

“The first set of show dates are planned specifically for the tour; however, more and more persons have been calling to check on potential dates for their cities,” promoter Kenton Cole told The Gleaner.

Cole, of Kaden C Promotions, says that the main goal of the tour is to recreate what made the ‘90s the most prominent era in dancehall to date.

“We want to leave the Caribbean diaspora with a lasting desire to reconnect with the sounds and feel of that era, and, hopefully, this will help to influence the next generation of dancehall lovers to seek out, not only new releases, but that music which has lasted for generations,” he said. “Also, for this to happen on the local stage, the current crop of artistes must recognise the impact that dancehall has on all the other music genres across the globe.”

According to the Drive Me Crazy entertainer, Mr Easy, the Tri-State area has played a major role in launching his international career.

“With all the ethnic groups that live in the Tri-State area, dancehall has been exposed to a diverse number of cultures and, in turn, the countries,” Mr Easy said.

He continued: “Once a dancehall artiste makes it in states like those on the East Coast, straight to Toronto, it becomes easier. Trust me, if anything I am happy for, it is that I am part of that era where massive support has been received.”

“The mission is to revive ‘90s dancehall in the US,” he says, “and once an entertainer has a ‘lion-logue’ of classic hit songs to perform for fans, he or she will remain relevant. Talking from my own experience as a recording artiste, I still have fans worldwide who have stuck with me and remain loyal to the movement …they deserve a treat to see artistes from their favourite era perform.”

Banton, who has been consistently touring places such as Japan, Africa, and Germany, performed last February with Jigsy King and Spragga Benz in New York City – a performance that received overwhelming response and gave birth to the idea of hosting a tour.

“As for what to expect; the fans who are coming out know exactly what to expect, but for the first-timers, the package speaks for itself, and, as always, the artistes of our generations will bring the fire,” Banton said.