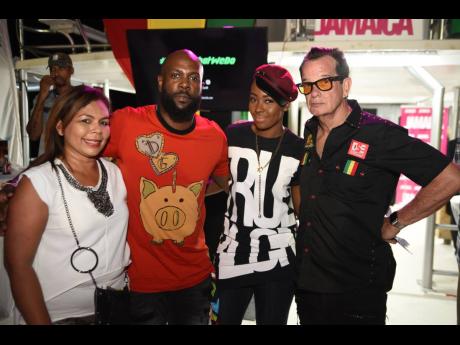 The first Sumfest launch to be held in a Caribbean country outside of Jamaica, the filled-to-capacity cruise event set sail from Anchorage, Chaguaramas, at 8:30 p.m., after a short programme, which included presentations by Alicia Cabrera, senior marketing manager of Caribbean Airlines; Camile Glenister, deputy director tourism marketing for Jamaica; and of course Joe Bogdanovich, chairman of Downsound Entertainment and owner of Reggae Sumfest.

The Sumfest boss said he was committed to advancing the unity of the region through music. “Caribbean people love reggae and soca and there is a strong unifying power in that.”

The launch party continued until 11 p.m. with guests partying to the musical stylings of Trinidad-based DJ Trevlyn, who showed excellent skills in his selection of reggae music mixed with a touch of soca. The energy and vibe of the event was on continuous high for the duration of the cruise.

This event is the first of four launch events for Sumfest 2019. In April, festival organisers will host the customary New York launch in Brooklyn. The Sumfest MoBay launch is scheduled for May, while the final event will be held in June in Kingston.

In addition to the launch activity, Caribbean Airlines marked its partnership with Reggae Sumfest by adding the Reggae Sumfest logo on either side of the nose of a 737 aircraft. The official unveiling was done the day before the launch at the airline’s hangar. All agreed that this initiative to launch in Trinidad will not only mark a solid partnership with the airline but will also open the doors to increase the visitor arrivals from the region to Jamaica while encouraging the unifying force that is already in motion between the musical cultures of Trinidad & Tobago and Jamaica.

Festival organisers stated in a release that anticipation for Sumfest 2019 is “sky high”, with the first set of early bird ticket flash sales, held in February, being completely sold out in less than 48 hours. They upped the excitement ante earlier this month when it was announced that the event would be headlined by reggae artistes Buju Banton, Beres Hammond and Chronixx.

Sumfest 2019 rolls out an impressive schedule of events leading up to the greatly anticipated concert nights on July 19 and 20. The week of events is expected to kick off on July 14 with the Sumfest Mawnin Medz beach party and followed by the Street Dance, All White Party, all black Blitz Party, Global Sound Clash, as well as the Reggae Sumfest Symposium.