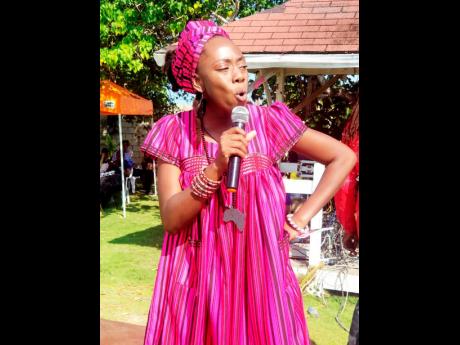 Contributed
Lioness Sheeda delivered her pieces from a place of passion and experience having taught a group of children in Africa for over a year.

It was a long trek down a somewhat lonely road, which led to the new venue of the inaugural St Thomas Heritage and Poetry Festival at My Beach, in Prospect in the parish, on Sunday.

The event, which was initially slated to be held at the popular Lyssons Beach in the area, was shifted only two days prior to its staging, a circumstance which, according to conceptualiser and promoter Omar Ryan, may have been responsible for the poor turnout.

“I know that’s the way things are sometimes. For one, it’s the first time that the event is happening, and the fact that the location changed from Lyssons Beach to My Beach might have thrown off a lot of persons. Others wouldn’t know that it was changed and went to Lyssons Beach and just decided to stay there or got frustrated and returned home because they don’t know where My Beach is,” he explained, adding that he was forced to relocate based on discussions with parish officials, who raised concerns about the noise control and expected traffic and the proximity of the venue to the Princess Margaret Hospital.

The festival was slated to begin at 8 a.m., giving numerous small business owners the opportunity to showcase and sell their products.

Among those vending were Zahra Thompson with her natural skincare merchandise; the Port Morant CDC with their banana products, including bread, cake, drops and wine; local author Kimberly Thompson with her book titled Watershed; Hubert Williams Traders with locally made coconut oil; and the Bless to Bless Foundation with coconut drops and banana chips. Various Ital food items were also available.

The grand poetry show didn’t begin until minutes to 3 p.m., nearly three hours after the expected start time. Many local artistes were given an opportunity to minister through the spoken word to the few people who were in attendance.

“Most people were there to see Muta, so when he was on everybody was at attention. He touched on things concerning the parish and reasoned with the people. They really enjoyed his set. He was the last to perform and people didn’t mind waiting to hear from him, and trust me, he didn’t disappoint,” said Ryan, who was also a part of the line-up, under his stage name Melenin.

Admitting his pleasure at the performances and the degree to which they were all accepted by the patrons, Ryan told The Gleaner that his only concern is the outstanding expenses that he will now have to take care of, since admission was not as profitable as he had hoped.

According to him, “To some degree mi kinda feel a way, not because of the fact that many people didn’t come but because of the sponsorship. Persons had committed to coming on board and they didn’t. So they left me in a position now where I had to ensure that the event was executed. My only worry, to be honest, is just the after bills because me borrow mi friend dem money and now I have to find a way to repay them.”

Despite the setbacks and with ‘faith more strong’ Ryan added, “I really give thanks for who came and the support that we got. Challenges come but we are still alive and thankful. Next year again.”