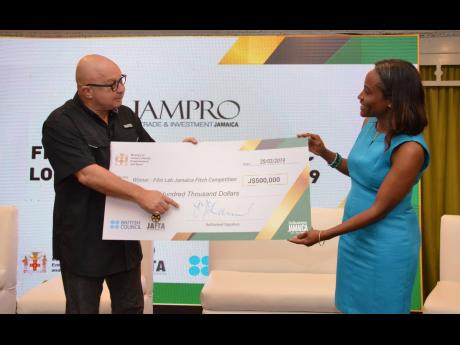 Tony Hendriks’ Shoot The Girl, one of the first five short films selected in the JAMPRO/PROPELLA short film initiative in 2016, has been awarded yet again – this time to the tune of $500,000.

Hendriks again pitched the project last Friday, at the JAMPRO Film, Animation and Music Local Investor Forum, held at The Knutsford Court Hotel in Kingston, as part of the Film Lab programme. He was triumphant, and awarded by the Ministry of Culture, Gender, Entertainment and Sport.

In a surprise move, a second pitch (from a total of six) was so impressive that it immediately attracted a similar international investment. Traytown, written and pitched by Letay Williams, was awarded $500,000 by Trinidadian investment management firm Aspire Fund Management and C15. Williams described the complete experience as amazing. “I’m still spinning,” she told The Gleaner.

When delivering her pitch, the young film-maker described initial jitters, but found strength in the ultimate lesson in making a pitch stick – know your story, a lesson she learnt from the Film Lab programme. “I had to take several deep breaths. It was my second time pitching my story. I guess they were moved with my pitch – how I shared the story of Traytown. I started bawling. I don’t remember what happened after that,” Williams laughed.

The young film-maker comes from a background of an undergraduate degree in literatures in English and film studies. One of her professors alerted her to the pitch competition. “It was two days before close off. That was in 2017 – It’s been awhile coming,” she shared. Williams explained where Traytown originated, telling The Gleaner, “Coming out of Storm’s (Saulter) screenwriter’s course – they picked it and what was supposed to be a three-day workshop became five.” She now plans to use the winnings to produce a short film based on that script – and take it on the road. “I want to shop it at festivals and raise some more money, because we know it’s not cheap to pick yourself up and participate in all the festivals,” she said.

A more seasoned industry player, Hendriks’ script has yet to develop past short film. His recent award, he hopes, will change that, with him revealing that it will help. “Anything is greatly received, but as Jamaicans would say, ‘That spen’ off already man!” he told The Gleaner.

“In terms of any development funds that you garner along the way, especially as a writer, and someone producing an original work, there has been a lot of expenditure – between travel and the sweat equity that goes into the production, it helps with that,” he continued.

He explains that a portion of the funds will be budgeted for legal fees. “There’s documentation to put together, to get the attachment of talent to the project. That’s in the early stages. It will be a feature film once we’ve raised the capital. We have offer of development funding, but that’s all verbal at the moment. It’s a like a snowball, once you get one, you get more coming,” Hendriks said.

The Film Lab development programme – a collaborative exercise between JAMPRO, The British Council and JAFTA – is a holistic initiative focused on capacity-building, and is projected to impact writers, script editors and producers. Film Lab participants are taken through a process comprising aspects of the creative as well as the business and marketing sides of film-making.