Bescenta is armed and ready for local stages 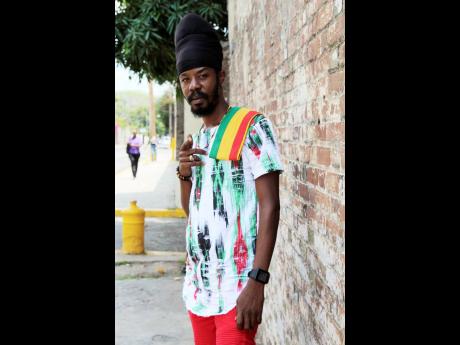 Bescenta is an example of slow and steady wins the race. The reggae singer emerged in early 2000 with strong ambitions that manifested through socially conscious lyrics primarily focused on motivating youths.

He received his first breakthrough with the hit song The World Is In Trouble, which was recorded in 2004, and entered the Jamaica Cultural Development Commission (JCDC) Popular Song Competition in 2005, only to emerge as one of the winning entries.

But ambition doesn’t end with the first hit song, Bescenta says. The pursuit of excellence remains the driving force behind the reggae singer, who is a rare combination of intensity, quiet confidence and humility.

“I got the break in 2005, and never quit doing what I do from then. It improves with every year, and for youths pursuing the arts, the JCDC platform is a good outlet to not only share talent, but learn more about local and international culture,” Bescenta told The Gleaner in a recent interview.

He added, “Throughout my career as an artiste, I have been granted the opportunity to share my music on the stages of major shows – Reggae Sumfest in 2006 would be one of the first big performances after the Popular Song Competition, but peculiarly it is perhaps also the last time I performed for that audience.”

The reggae crooner is not disappointed about not performing at Reggae Sumfest in 13 years. After all, he has consistently graced the stages of other notable events throughout his career, including Rebel Salute, Iba Mahr’s Sound Di Alarm concert in St Catherine, A St Mary Mi Come From, and Bob Marley’s Birthday Celebrations.

Armed with a cartridge of new songs that bear a strong message, he says the set has changed a little to include singles like Haffi Win It, Talk To Me and Poor Man’s Day to guarantee steady promotion of his latest productions. Still, die hard Bescenta fans never tire of hearing the 2009 single, Calm Dung Yuh Nerves. It is one of those songs from the artiste’s catalogue that get the revered lighter in the air, and his set always starts with it.

“So far the line-up for this year’s Reggae Sumfest is impressive but it needs Bescenta in the line-up,” he said. “My team and I have reached out and I am hoping this year will be the year that I get to grace the stage again … it is full time now.”

However, Bescenta reflects a sense of disquietude when asked about the evolution of the music industry. “The plea for conscious music is never-ending – on a daily basis radio broadcasters plead with artistes to clean up the lyrics, because the youths are listening, and I don’t think, as a society, that we are doing a good job to give the positive music a real chance. For artistes like me (and I use myself as an example) that do clean music constantly encounter a fight. Real artistes that are working for the betterment of the industry need to get highlighted on these shows.” He continued, “It is about where the music is coming from. It is about music and love, and nowadays the artistes in every sector and genre from dancehall to reggae are airing personal matters – it reach inna the artistes’ bedrooms to say who do what and who know what about who – and that type of mentality has to fix for the betterment of music on a whole.”