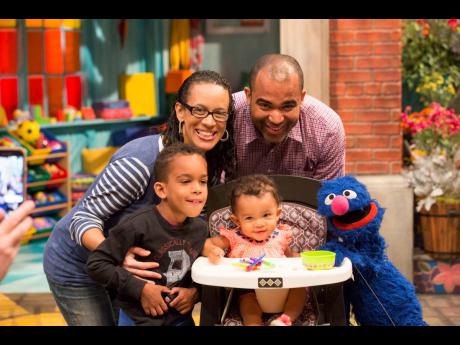 The KingstOOn Animation Festival has invited a swathe of international industry players to share their experience and expertise at this year’s festival, currently on at the University of Technology, Jamaica. One such presenter is film producer Kimberly Wright, whose father and maternal grandmother are Jamaican. Wright has been working with Sesame Street for the past eight years, and her job is to commission all of the live-action and animated shorts for the show – like letter and number films or live-action films for ‘Cookie Monster’s Foodie Truck’.

On this trip, she hopes to ­commission at least one Jamaican illustrator, animator or film-maker for Sesame Street. “I attend a lot of film festivals domestically and internationally looking for ­film-makers and animators to potentially partner with. Once they are commissioned, I’m basically overseeing all the aspects of the predevelopment of the films and the animations from conception to production right through to delivery. We work with our curriculum team to make all that happen,” Wright explained to Th e Gleaner.

“There are a great deal of opportunities for content creators – there’s a lot of work to be commissioned – and once we commission from an animator or film-maker and the work is good and we enjoy working with them, we’ll go back to that ­animator or film-maker for future projects. We have animators we’ve worked with for many years. It’s kind of a long-standing relationship at that point,” she said.

Sesame Street is globally ­recognised by children and adults around the world – a collection of nice and friendly ­puppet monsters. Though famous for the Muppets, Sesame Street has a long legacy of animated films. “We have everything from Ladybug Picnic and the classic Pinball ­animation – a ­popular one that a lot of folks remember. We think everyone has a personal favourite. They are an integral part of the show. We do letter films, number films, live-­action content – which really helps ­reinforce the overall curriculum,” Wright told The Gleaner.

Wright’s presentation at KingstOOn is titled ‘The Hero’s Journey: Creating Cultural Stories with Global Appeal’. “Muppets have a universal appeal. It’s what we’re known for. Kids love them. They gravitate to them. They see themselves in our characters, and connect with them on so many ­levels. They’ve grown up with them into adulthood. It transcends age,” she said.

For each season of Sesame Street, Wright works with 22 to 26 new films. Considering that the programme’s curriculum is revised annually and that it is dedicated to producing globally inclusive ­content, there is no exact number of illustrators, animators or ­film-makers associated with it.

“It’s kind of a twofold thing. We don’t have an exact number. While we do have a team of in-house illustrators and animators called SWAT, or the Sesame Workshop Animation Team, who work on digital projects and other Sesame, related projects, at any given time, I’m working with many film-makers and animators at one time. And they’re from everywhere – all over the United States. There are international film-­makers and ­animators as well,” Wright explained.

While in Jamaica this ­weekend, Wright has her eyes open for new talent – particularly for a fresh Sesame Street format called ‘ Cookie Monster’s Foodie Truck’. “That has live action films in there that are commissioned. It’s all about healthy eating. We’re teaching ­children about healthy foods and where they come from, so there’s always a live-action film that needs to be commissioned there. When the opportunity arose to make a film about bananas and where they come from, I thought, ‘What better time to find a Jamaican film-maker?’ I do not have one in our repertoire of film-makers,” Wright shared.

This years’ KingstOOn Animation Festival runs until Sunday, and entry is free.