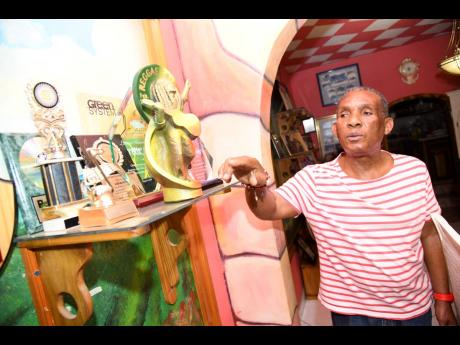 Rudolph Brown
Ken Boothe shows off some of the awards he has won during his illustrious career. 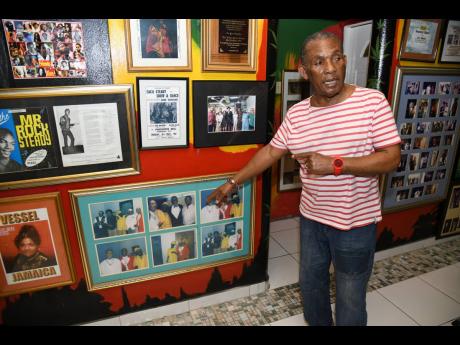 Rudolph Brown
Treasured Memories: The cover of Ken Boothe's first album, 'Mr Rocksteady', hangs proudly on his wall of fame at his house, which doubles as a mini museum. 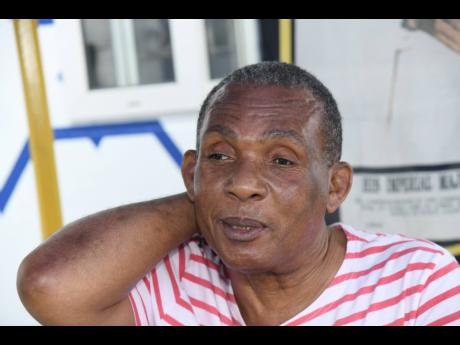 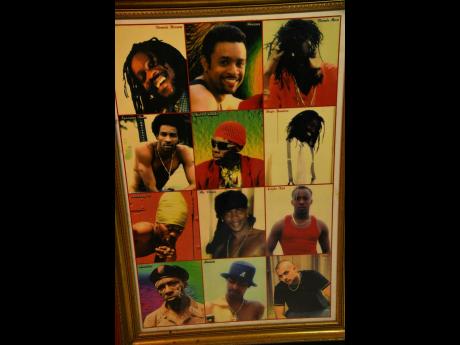 Rudolph Brown
This picture of several reggae artistes in their younger days is one of Ken's favourites.
1
2
3
4

When Ken Boothe saunters onto any stage, in any part of the globe, microphone in hand, intent on performing until the sweat trickles down his forehead and snakes down his back, the legendary reggae singer is larger than life and has fans eating out of the palm of his hand. But when Ken is at his home, which doubles as a reggae museum, he is the adored grandfather, who is putty in the hands of his beloved granddaughters, Abrella, Sabrella and Gabrella. And if their names ring a loud bell, chances are that’s because the girls are all named after their granddad’s hit song Artibella.

Artibella was certainly one of the defining songs of the illustrious 50-plus years singing career of the legendary Kenneth George Boothe, OD, who released his first album, Mr Rock Steady, at the age of 17. This album included numerous hits, including The Girl I Left Behind, When I Fall In Love, I Don’t Want to See You Cry, Home, Home, Home and Puppet On A String. Then in 1971, Ken Boothe stirred the passions of a people with the song Freedom Street, and he has since then been touring the world as a musical ambassador, carrying Jamaica’s flag high.

Ken’s journey has now been chronicled in a book, titled My Iconic Musical Journey, which is scheduled for release in May by Pageturner Publishing House. The book will be available locally and on all digital media platforms. According to the publishers, distribution details for the UK and Europe – where Ken has a large fan base, having had number-one songs there dating back to 1974 – are being negotiated.

Of the book, Ken says, “ My Iconic Musical Journey is my story. I lived it. I walked all those miles to Studio One. I was the one of whom Duke Reid asked Stranger Cole, ‘da lickle fat boy deh can sing’? A question that was answered the moment I started. This is my story. I have seen too many of my other brothers in music transcend, and it’s either their memory fades or the stories that are told of them are not authentic. I believe that the best person to tell your story is you.”

And integral to that story is Ken’s genesis. Believe it or not, the great singer, Ken Boothe, actually started out as a dancer. The group was called Jack and Jill, and it comprised him and his sister Clover. But, Ken soon transitioned into singing and by the time he was 10, his mother, Irene Boothe, used to take him to the YMCA on North Street, near to Kingston College, where he would sing his little heart out.

“I didn’t even know the words of some of the songs, but I would make it up as I go along. Is long time I doing that you know,” he said with a smile.

Ken, who is a follower of HIM Haile Selassie, credits his mother, a Maroon and one of the first Garveyites, for teaching him the scriptures and for passing on to him her singing talent. “My mother was always singing. She would be washing and singing. It was a joke that when my mother was approaching anywhere you could know because her singing preceded her.”

Ken also heaped praises on his friend and colleague, Winston ‘Stranger’ Cole, who was instrumental in fast-forwarding his career.

“Stranger was the person who took me to producer Duke Reid, and that was where I got my first real pay. Ten pounds,” he said. It was so much money for Ken that he didn’t know what to do with it, so he took everything to his mother. But, had it not been for Stranger, that would never have materialised, because Ken had no clothes to wear on that outing. “My father was a strict man and our good clothes were put away safely, and there was no way I could go and ask him for them.”

Therefore, a pencil-slim Stranger came to the rescue of the ‘fat boy’. He loaned Ken a pair of pants.

“The pants were so tight that it could not even zip up,” Ken recalled with a laugh.

The duo, which became known as Stranger and Ken, subsequently released a number of tracks between 1963 and 1965. They recorded Artibella for producer Sir Coxsone, and that’s when Ken got his second big payout, a whopping twenty-five pounds. This time around, Ken gave a portion to his then girlfriend (now wife) who was pregnant, and then went on a shopping spree at the major department store in downtown Kingston, Bardowells.

While Bardowells no longer exists, Ken, at 71, continues to take his musical exploits to even higher heights, performing in far-flung places of the globe to sold-out audiences. In two months’ time, Ken will pack his bags and head off to Europe for yet another tour of countries which don’t even speak English, but whose reggae addicts fully understand and embrace Ken’s musical language of love.

Ken is the first one to admit that this road has not been easy, but from the days when he lived with his parents in the twelve shillings per month tenement in Denham Town, he knew that he was being groomed for this mission.

“It’s not an easy journey but, you know what they say, there is no business like show business,” he declared.