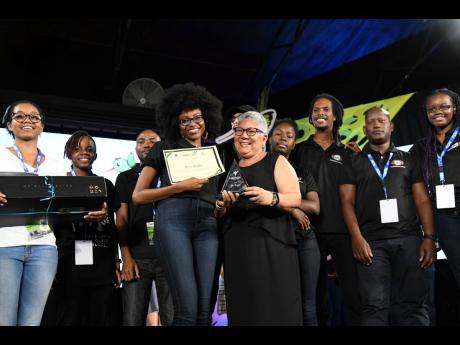 Rudolph Brown
Kenia Mattis from ListenMi Caribbean, flanked by her team, won best concepts in KingstOOn 3. Here she receives her prize from Jacqueline Lynch-Stewart, chief technical director at the Office of the Prime Minister.

For its third staging, KingstOOn Animation Festival proved what they began touting in 2013 - that the local animation industry is robust with talent and poised to expand globally.

On Sunday, at the close of the three-day long event, animators from France, Thailand and as far away as Cameroon, descended on the Alfred Sangster Auditorium at the University of Technology to find out if they would stand out among thousands, and walk away with stacks of enviable prizes.

There were two competitions: the KingstOOn Emerging Animated Content Competition (open to Caribbean citizens only) and KingstOOn International Animation – both with four categories.

Submissions for the competition were opened between April 23, 2018, until November 16. This time around, judges sifted through almost 2,000 submissions.

“On closing day, they received 1,842 submissions from 105 countries. This was a huge step up the ladder of success for KingstOOn – because in 2016, we received about half of that,” said Robert Reid, animation specialist with the Youth Employment in the Digital and Animation Industries (YEDAI) Project. He added, “In 2013, we received 125 entries. This demonstrates that KingstOOn is increasingly establishing its presence in the global market.”

Calls for feature films yielded only one submission – Minga and the Broken Spoon by Cameroonian film-maker Claye Edou. Though he won by default, Edou’s accomplishment is a victory for Cameroon, as the nation’s very first animated feature film.

“I feel blessed to have been able to come here to this wonderful country, to show the diversity of my own country. It was not easy, because no feature film had been made in Cameroon before. The only thing I can say is long life to the KingstOOn festival,” Edou said.

The KingstOOn Emerging Animated Content Competition, housed the categories: Best Storyboard, Best Character Design, Best Short Film and Best Concept. Best Concept finalists were automatically selected as finalists for the Pitch Competition – which happened earlier in the week – a memory that brought whoops and cheers from the audience.

Louder still were the cheers when The Adventures of Kam Kam – Space Explorer, pitched by Kenia Mattis (ListenMi Caribbean) was announced the winner.

In the category for Best Storyboard, young Jamaican Gashwayne Hudson walked away as the first place winner, with a number of gadgets and programme subscriptions for his project, Spectacular Specs, while Rajendra Ramkallawan from Trinidad and Tobago, placed second for his storyboard for Toy With My Heart. For Best Character Design, Jamaican children’s book illustrator Danielle Parchment won for Gabby - Duppy Conquerer. In addition to gadgets and application subscriptions, Parchment is also a scholarship recipient for a summer programme at Capilano University in Canada – valued at CAD$12,000 “[KingstOON] really helps young Jamaicans get out there. I’m happy to be a part of it,” Parchment said.

Second place went Hudson’s Spectacular Specs, who said that KingstOOn gave him a push to get his ideas developed. “It’s been a really good experience. I’ve learned so much throughout this. For the past couple of days, I can’t explain how much I’ve been learning.”

In the Best Short Film Category, Tanya Batson-Savage’s Agwe The Movie walked away with the second prize, while Martinique’s The Flight by Alain Bibard took the top spot.

In Best International Short Film, Thailand’s Peter Chanthanakone collected the top prizes for Midnight Story, on behalf of his team back home. “I’m very impressed with the way everything was done, and I really see the future of animation in Jamaica,” Peter said. South Africa’s Anthony Silverton placed second with Belly Flop.