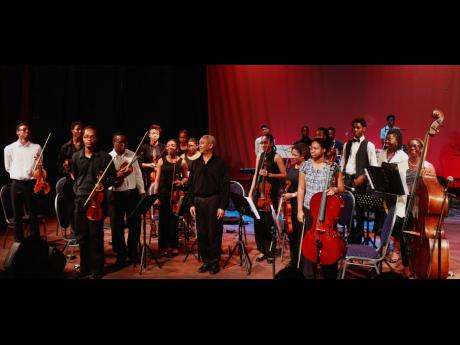 Contributed
Peter Ashbourne (centre) with the Classical and Jazz Ensemble of The University of the West Indies.

The Classical and Jazz Ensemble (CAJE) of The University of the West Indies (UWI), and the UWI Vocal Group and Wind Ensemble, will be staging its annual concert – Uncajed Melodies V, at the Philip Sherlock Centre for The Creative Arts, this Saturday and Sunday.

The evening of classical, jazz and contemporary music will be staged under the direction of renowned composer and musical director, Peter Ashbourne. Guest ­appearances will be by pianists extraordinaire Orville Hammond and Stephen Shaw-Naar – both ­lecturers at the School of Music at the Edna Manley College of the Visual and Performing Arts.

The programme will be divided into three segments: classical and jazz and the ‘grand finale’, contemporary, during which all the performers will join forces to deliver the climax of a very entertaining musical experience for the audience.

Every year, Ashbourne composes and arranges pieces specially for the annual concert. Some of these included Rain Weavers in 2017; the Three Dances for Steel Pan and Chamber Orchestra in 2018, and the Sweet December, which will be performed in the upcoming shows by UWI student and member of the University Singers, Shaquore Nicely.

Ashbourne has arranged numerous items for the group’s repertoire – one of which is the Medley on James Bond’s movie themes, which will also be premiered during this year’s concerts.

CAJE started with the appointment of composer, arranger and musician Peter Ashbourne as senior music fellow, who instituted at the Philip Sherlock Centre at first two ensembles, one classical and the other jazz. In 2016, a vocal group was added, with a repertoire and style more likened to jazz and jazz harmony. In 2017, a wind group was started which included flute, clarinet, bassoon and trumpet players.

The first concert, titled ‘The Waters Of March’ took place in March 2014, and featured the two ensembles. Annual concerts followed – ‘Uncajed Melodies’, ‘Uncajed Melodies II, III, IV’ and now in 2019, ‘Uncajed Melodies V’. The CAJE group consists of students, recent graduates and faculty of The UWI, Mona campus. Students are from across all faculties, including Medical Sciences, Natural Sciences, Literature and Humanities, as well as Law, among others.