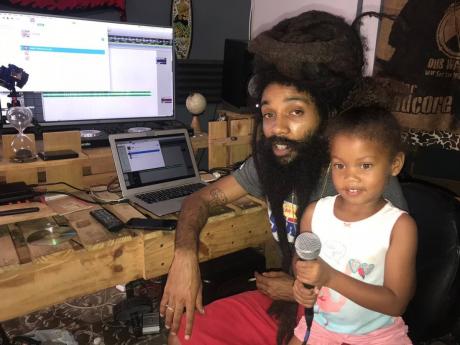 Contributed
Yaadcore and his daughter.

With no intention to abandon his established career and reputation as a globetrotting reggae and dub selector, Yaadcore is ready to take his musical ambitions to another level. Last year, the selector added producer to his skill set – with the release of the single No Fenke Fenke, featuring Shanique Marie and Kabaka Pyramid. This year, he will wade deeper into the ­music-making waters with the release of his debut single - Ready Now.

“We just work natural inspiration. It just happened natural,” Yaadcore told The Gleaner. During a private listening session at Yaad Studio for his latest mixtape called Riddim Salut Vol 1, the selector-producer-vocalist offered a preview of the song, scheduled to be released on Friday, May 3.

He explained how he was inspired to start writing when he entered the realm of roots and reggae. “When we start play reggae and roots and ting, them have a style called ‘chapter two’, where you play the riddim, or another version of the song. Mi woulda always want to be able to have some lyrics pon the riddim version. That really inspire me to start write,” Yaadcore explained at the private listening party.

He did a demo of the first track last year, officially recording it earlier this year. Ready Now was produced by Rian Williams from Bermuda, and co-produced by Ian McKee, based in California, and Yaadcore. “ Rian started, me and Ian come together and do the finishing touches,” he added.

“Me have other songs demo’d as well. But mi nah go lef’ out the selector thing – but if people request the whole artiste vibe, then you done know ... we ah work with it same way,” he continued.

Before premiering his début single, Yaadcore also shared segments of his brand new almost one and a half hour long mixtape, Riddim Salut Vol 1. “The whole aim for this is to bring back a vibe for mixtape – highlighting dubplate style. That is Jamaica’s culture as well – where we put together some songs and spread a vibration. We see that the vibration is needed right now,” he said.

The mixtape features 20 riddims, including Promise Land, Drum Song, Broadway, M16 and the Bad Boyz (renamed RastaBoyz) riddims; along with duplates from Grammy-nominated recording artiste Protoje; the elusive Chronixx, Damian Marley, Aidonia, Pressure Buss Pipe, Toot and the Maytals and Kiddus I – famous for his appearance in the iconic reggae film, Rockers.