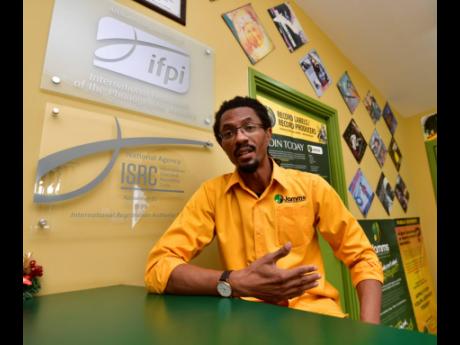 Evon Mullings, managing director of the 1,000-member strong Jamaica Music Society, JAMMS, is proud of the achievements of the not-for-profit organisation in it relatively short existence, and currently has plans to significantly elevate the profile and reach of the society.

Established in 2006, JAMMS officially started its operation in 2007. The society manages the broadcasting and public performances rights of its members through its role as a licensing agency/collecting society.

JAMMS, whose role extends to the collection and distribution of royalties collected from various music users to its members, has the distinction of making the first payment to its members within two years, when the industry norm is three to four years after setting up shop. In fact, since 2009, JAMMS has paid out a total J$130 million to its members, after expenses. Mullings sees this as the organisation fulfilling its mandate to earn the confidence and respect of its rights owners, which includes established record producers, aspiring producers, self-producing artistes and label owners.

‘We mean business when we do business’ is almost the motto of JAMMS, and Mullings, an economist by profession, is adamant that best practices are employed in all aspects of the organisation’s operations.

Regarding the royalties payment, he noted that some 50 per cent was made to entities overseas, because JAMMS has reciprocal agreements with countries in Europe, the Caribbean, and also in America.

“It is no secret that more that 50 per cent of music played here in Jamaica is foreign music, so we secured an agreement with our affiliates, at the outset, that we would not remit more than 50 per cent of our total, and it has been working out well for our members, ” Mullings said.

Naturally, that brought the conversation into the sphere of quotas, a discussion which erupts from time to time, but one which seems to always end in a stalemate. Mullings, not surprisingly, sees the immense value of such a system.

“Here in Jamaica, a quota system has been lobbied for, but not in a cohesive way. There are quite a few countries with quotas and it is there for a good reason, many reasons in fact. Canada has a quota in place to ensure that a certain per cent of their music is played. In Nigeria, it is mandatory that the public broadcasting stations play 80 per cent local music. Some European countries have a quota system, and there is nothing bad about that,” Mullings told The Gleaner.

He noted that the reason for it is simple. If more local music is played, then that translates into more exposure for artistes, musicians and producers, and, by extension, more royalty payments for these groups. Mullings was quick to point out that despite the grumblings of the naysayers, good music is being produced in Jamaica that is more than worthy for airplay.

“The reality is that foreign interests still take their cue from Jamaica. They look to us musically, and if we start playing the good music that is being produced here – and it is a fact that very good music is being produced here – then that will make us more viable in the international market. Unfortunately, some of the music that is produced in Jamaica is only heard when we go overseas,” he stated.

Mullings says that one of the reasons why this issue of quotas remains on the back burner is that legislators continue to view the music business as pure entertainment, rather than a space where serious business is taking place; and until this wrong is righted, then progress will never be made.

“Until that happens, then those responsible for policy framework and legislation will not make the necessary effort to put proper things in place. For example, every year the Budget is read and we hear about all kinds of tax breaks for tourism, for example. But when last has there been an incentive for the music business?” he queried.

He added, “Hoteliers have benefited from paying less GCT and have enjoyed other tax breaks, but where is the tax credits for those persons already in the music business, and to encourage others to come in and build the music industry? he quizzed.

“Sadly, the fact is that, for the most part, the music industry has propelled on its own steam,” Mullings lamented.