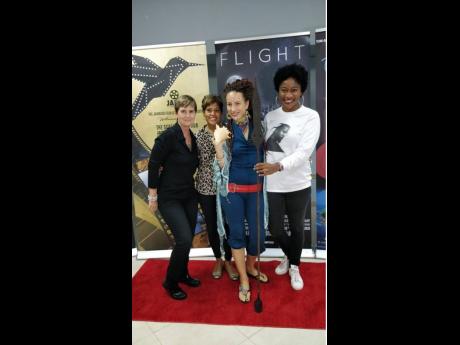 On Thursday night, the efforts of the Jamaica Film and Television Association (JAFTA) over the past three years finally paid off. Four hundred patrons filled the Courtleigh Auditorium for the sold-out Kingston premiere screening of the four finalists of this year’s JAFTA Propella short-film initiative.

This year’s finalist were Agwe by Ina Sotirova, Going Down by Mezan Akoya, Safe Harbour by Kaiel Eytle and Flight by Kia Moses and Adrian McDonald.

In its three years, the initiative has shown itself progressively effective in the expansion of the local filmmakers’ audience, introducing these filmmakers to the global marketplace and pushing projects beyond concepts (and short form) towards feature-film or series production.

“For the last three years, the JAFTA Propella programme has received invaluable production funding for the short films from the CHASE Fund, as well as key ­promotional and market attendance support from JAMPRO, which has allowed our Jamaican shorts and film-makers to be exposed on the international sphere,” president of JAFTA, Analisa Chapman, told The Gleaner.

Moses’ Flight and Sotirova’s Agwe epitomise the benefits of the initiative.

Agwe, the first animated short of the initiative, won the second-place prize for Best Short Film at the KingstOOn Animation Festival, which took place last week. Last month, Flight was nominated in seven categories at the Black Women Film Network Film Festival. Moses, a first-time film-makers walked away with the award for Best Screenplay, the Audience Award, and the Best in Film award – the overall prize for the ­festival, which includes a cash prize and a meeting with HBO executives. Flight went on to win Best Short Film and the People’s Choice Award at the Nouveaux Regards film festival in Guadeloupe. In a show of Jamaican strength, Storm Saulter’s Sprinter also took top prizes at the festival, winning the Best Feature award. Fight has also officially been selected for the Pan African International Film Festival, to be held from April 17 to 21, and to participate in the ‘Short Film Corner’ at Cannes Film Festival in May. The crew is waiting to hear whether the film has been selected for ‘Diversity in Cannes’ at the festival.

Moses is currently on a fundraising campaign to raise USD$17,000 to show the film at more festivals, including the film-making Mecca – Cannes.

Of the first five short films made through the initiative, Shoot The Girl by Tony Hendriks and Origins by Kurt Wright are currently in development as a feature film and a series.

Shoot the Girl, written by Tony Hendriks, was recently awarded J$500,000 at the JAMPRO Film, Animation and Music Local Investor Forum as part of the Film Lab ­programme to complete the development of the script for screen.

Origins, created by Kurt Wright, recently wrapped up shooting on a pilot episode for the hopeful ­horror series. Along with a featurette of the JAFTA Propella films from 2016-2018, the Kingston premiere screening also showed a character reveal from Origins the Series.