The Yale University Whiffenpoofs to perform in Jamaica 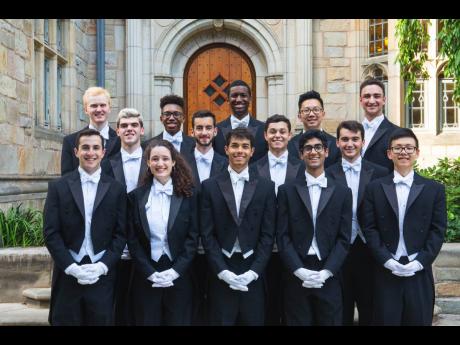 The world’s oldest and best known collegiate acappella group, the Whiffenpoofs, are set to perform in Jamaica for the first time on May 3.

Every year, the most talented senior Yale students are selected to be in the Whiffenpoofs. The Whiffs Quartet was founded in 1909 and has used the Mory’s Temple Bar - the famous Yale tavern, its home for rehearsals and concerts. Today, the group is internationally known as the most celebrated tradition in the culture of Yale University, with performances of consistent musical excellence for over a century.

The singing group has consisted only of men since 1909, until 50 years ago (1968), when they went co-ed. And with Jamaicans being everywhere of importance, two members of the Yale University Whiffenpoofs – Isaac Young and Emil Beckford, are of Jamaican descent and this has influenced their visit to Jamaica (both have Jamaican grandparents).

“So far, we’ve performed in over 20 states, as well as China, Thailand, Canada and Puerto Rico.

“I am extremely excited to bring the group to Jamaica. I’ll get to sing for family and friends I haven’t seen in years and a chance show my beautiful country to my friends,” said Young.

He noted that the group is set to embark on a three-month-long world tour beginning in May, and by August, they would have toured almost 20 countries.

Michelle Thame, a member of the Friends of Yale University Whiffs, said, “We are extremely happy to know that the Whiffs has decided to perform at such short notice, and is especially pleased that this event will be helping young musicians in Jamaica, as part proceeds will go towards the purchase of new instruments for the National Youth Orchestra of Jamaica, who will also perform at the event.”

The Whiffs have sung in the White House for presidents Obama, Gerorge W. and George .H.W. Bush, Bill Clinton, and Ronald Reagan, and in venues such as Carnegie Hall, Broadway’s Lincoln Center and the Kennedy Center. In recent years, they have been featured on television shows such as The Sing Off, The West Wing and Glee.