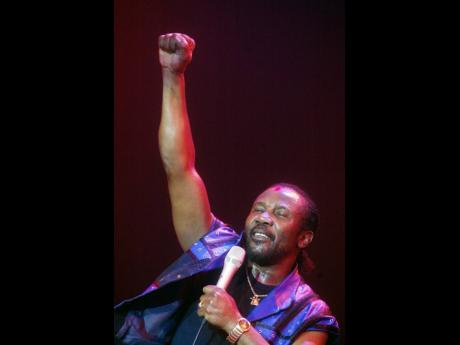 In May 2013, the reggae-loving world was shocked when it was reported that Frederick ‘Toots’ Hibbert – the frontman of the legendary reggae group Toots and Maytals, had been struck with a 1.75-litre vodka bottle, squarely in the forehead, while performing at an outdoor festival in Richmond, Virginia, in the United States. Toots was hospitalised and pulled from subsequent shows and college tours, and there was a partial media blackout.

For Toots, that was a not-so-great period in his musical journey, which saw him having to file a lawsuit against the concert organisers. His suit cited negligence for failing to provide adequate security to prevent someone from taking a bottle in or taking it from the beverage tent. During the course of the proceedings, Toots even changed lawyers. “He was a divorce lawyer, but what I really needed was a criminal lawyer,” he explained to The Sunday Gleaner. Venture Richmond, the event organizers, in turn, filed motions stating that it had no duty to warn or protect Toots unless the organisation “knew of an imminent probability of harm,” which it says it didn’t.

However, Hibbert says that although the court case is not yet over, one part of it has come to a wonderful conclusion. “The young boy who threw the bottle was drunk. People get high on my songs and people love it so much that they do crazy things,” he said with a laugh. “I forgive people who do crazy things.” Hibbert, in a gesture of magnanimity, wrote a letter to the judge, asking him to be lenient with the then 21-year-old bottle thrower, whose parents he met with after the incident. “His mom and dad, they love me. They were so happy. They could not believe that a black man was being so kind to them. They cried,” he said.

Eventually, the young man was given a six-month sentence, and in a sense, Hibbert, too, was sentenced as he was unable to perform for his fans for a long stretch. But today, he is back in the game – 100 per cent. The artiste tells The Sunday Gleaner that he is busy in the studio working on a few albums, and he is also scheduled to go on a US tour starting May 23 at Red Rocks Amphitheatre in Morrison, Colorado. Other dates include Illinois, Missouri, Pennsylvania, Maryland, North Carolina, Maine, Rhode Island, Vermont, New York, Massachusetts, Michigan, and Arizona. “I’m feeling good, good, good,” he sand. “Do it to me one time!” he continued. “God has blessed me with a voice that has a perfect pitch, and I am still able to use it,” he said.

Hibbert, the boy from Clarendon, formed the Maytals with Raleigh Gordon and Jerry Matthias in 1962. His career spans every phase of Jamaica’s musical evolution, earning him the reputation as one of Jamaica’s most consistent performers and one of the greatest reggae singers of all time. The three-time Grammy-nominated artiste, who is nominated in this year’s International Reggae And World Music Awards (IRAWMA), holds the Guinness World Record for the shortest time between the recording and release of a live album, Toots Live at the Hammersmith Palais. He has numerous gold and number-one songs in various countries, and The Harder They Come – one of Vanity Fair’s Top 10 Best Soundtracks of all time – contains two tracks from Toots and the Maytals, who were also featured in the film.

But despite all the glamour associated with the above mentioned, Hibbert says that the proudest moments of his career were when he won the first Jamaican Festival Song Competition with the song Bam Bam.

“I entered the Festival Song competition five times. I won it three times and placed second twice. I am very proud of that. Also, as a country boy from Clarendon, to know that I have more number-one records than any other artiste in Jamaica is a good feeling,” a satisfied Hibbert said, hastily adding that he was not being boastful.

But whereas he has fond memories of that early musical feat, he still lashes out at the “wicked, badmind people” who set him up made him serve nine months in prison on a marijuana charge. To this day, he still protests his innocence, but he also points out that prison was not as bad as it could have been. “I was allowed to have my guitar, and I wasn’t given any hard labour. Plus, family was allowed to bring me two or three meals per day,” he recalled.

History has it that the Maytals were poised for stardom when Hibbert was arrested, however, the group returned triumphantly in 1968. Their first single in two years, 54-46 (That’s My Number), related the story of Hibbert’s arrest, and it has been hailed as one of the greatest rock steady-reggae singles of all time. As rock steady gave way to reggae, the Maytals remained at the forefront of Jamaican music, and their single, Do The Reggay, was the first published use of the word. “I coined the word ‘reggay’ in 1968,” Hibbert said. “People are proud of me – people from all over the world.”

This is certainly a great achievement, considering that one can count on one hand – or perhaps even one finger – the number of persons who can lay claim to coining the name for an entire genre of music. But then, very few persons possess the extraordinary capacity and talents of a Toots Hibbert,

It should come as no surprise that there are persons who dispute Hibbert’s claim. It is recorded that reggae historian Steve Barrow says it was Clancy Eccles who altered the Jamaican patois word streggae (loose woman) into reggae. The liner notes of To the King, a compilation of Christian gospel reggae, suggest that the word reggae was derived from the Latin regi, meaning “to the king”.

It is possibly for this very reason that the opening lines of Hibbert’s biography on his website states: “Toots is one of the true architects of reggae, so much so that Do the Reggay – a 1968 single by Toots and his group, the Maytals – is credited with giving the genre its name.” He added, people tell me later that we had given the sound its name. Before that, people had called it a blues beat and all kinds of other things. Now, it’s in the Guinness World of Records.”