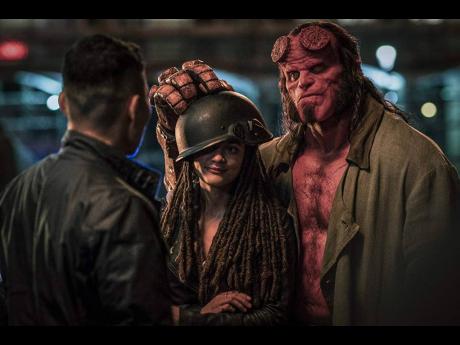 AP
David Harbour and Sasha Lane in a scene from ’Hellboy’.

If there was ever a time for Hellboy to make a grand re-entrance, it’s right now. The Avengers are reaching their end, and The Justice League is all but disbanded.

At a time when it feels like superheroes are everywhere, there seems to be space for a red-horned demon with a giant stone hand. With a new actor, a new director, and a whole new look, Hellboy is back and ready to show the world what he’s made of.

Shame that what he’s made of is easily one of the worst superhero films of all time. Think about that for a second. We may live in a golden age of super stories, but there was a time when they were at the bottom of the cinematic barrel. Nay, they were beneath the barrel. Yet with that terrible history, Hellboy still manages to be remarkably bad.

The story is simple enough. Hellboy, a demon sworn to protect humanity from things that go bump in the night, faces yet another threat to existence. This time, it’s Nimue the Blood Queen, a centuries-old witch who’s intent on bringing those that dwell in the dark to the light. An appealing idea for a hero like Hellboy, who tends to frighten the people he saves. While the film posits an interesting idea in Hellboy’s wavering allegiance, it never brings it to a satisfying conclusion.

Mostly, the film is made up of a collection of scenes that play out the same way. An offensive assault of heavy-metal music blasts the audience’s eardrums, Hellboy makes an assortment of bad jokes, and a visual atrocity that looks too ugly for television appears for a dull fight scene. Not to mention David Harbour as the lead constantly resorting to incoherent yelling, likely to get through the pounds of prosthetic make-up caked on to his face.

The one thing Hellboy has going for it, is that it’s never boring. Trainwrecks tend to hold your attention that way. Certain scenes are unique in their execution with what I like to call frenetic steady shots and make for some entertaining action. The worst part of watching Hellboy Hellboy is, there’s no reason for its existence. Everything it does was done better and more beautifully in the 2004 original.