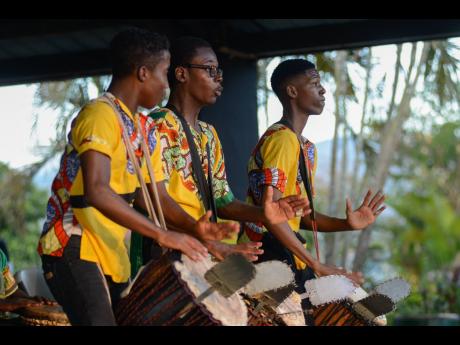 Joy and disappointment are always present at any competition, and Sunday’s staging of Jamaica Cultural Development Commission’s (JCDC) Drum Fest 2019 was no different. Even as the Louise Bennett Gardens Theatre on Hope Road reverberated to the beat of drums, those emotions ran wild in contestants as young as five years old.

Among the standout acts were five-year-old Jadein Lowe of Aldous Laidley, with his selection Morning Cocoa; Jamarli Innerarity of St Richard’s Primary School with her catchy, lyrical Smoke Nuh Joke; Ashley Grey, who had the audience requesting an encore with Mi Got This; Ruel Phillips with his dramatic delivery of Drum God; and Xaire Green of Belfield High, who was just stunning.

The programme of Drum Fest 2019 was divided into five categories, which were further subdivided into classes. Representatives of schools and communities competed as soloists and as groups, for trophies as well as titles, as the beat the rhythms on trap set, repeater, Congo and djembe.

When the results were announced, it was joy for Lowe, Jerimiah Frith, Tahj Moore, Brandon Ellington and Phillips, in the Drum Solo category. Ardenne High School walked away with two trophies in the Drumming Ensemble – Non-Jamaican Rhythms category. Other winners in the same category were Jamique Ensemble and Jamaica College, which continued their winning streak in the Jamaican Traditional Drum Ensemble. Vaz Preparatory School, Accompong Primary and Junior High and Ardenne High were also triumphant.

The annual festival saw the return of the Drum Solo – Trap Set category and the introduction of Dee-J/Sing–J category. The maiden winners for the latter category were Innerarity, Grey, Kasa Plumber, Alpha Primary School and Montego Bay Community College. Donovan Lewis, Andre Simmonds and Green were winners of the Trap Set category.

Jamique Ensemble was also awarded the Best Ensemble, and teacher Keino Barnett claimed the Teacher of the Year title.

But in a world of technology, is teaching the playing of ethnic drums relevant? The Gleaner sought answers from stakeholders.

Demoney Lennon, teacher of Accompong Primary and Junior High School, said, “It is important, as it is a way to pass on tradition and culture to the students. If you don’t, then it will die.”

Phillip Supersad believes that “[it] is very important, because it links us to our past, where our culture came from, and it links us to our ancestors. It also helps with physical and mechanical skills that every youth should benefit from”.

Mark Knibb, who teaches drumming between St Mary and Portland, believes “it brings empowerment to the children, it teaches focus, as well as hand-and-eye coordination”.

The Best Soloist winner, Phillips, shared that “drumming is everything to me. Drumming frees my spirit, drumming lifts me up”.

On the other hand, and understandably so, five-year-old Lowe plays the drum because he wants to go to festivals and win. His mother, Camille Robinson, said she encouraged Jadein and older brother Jahvonte, who also participated at the Music National Finals, to play the drum.