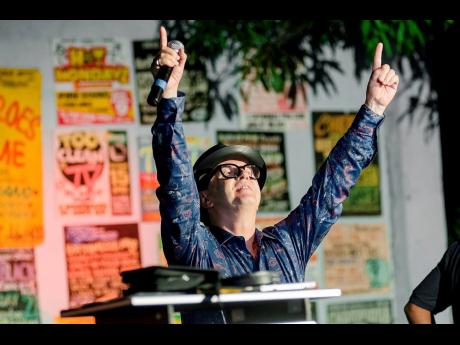 Like thousands of teenagers in the mid ’60’s, David Rodigan heard the backbeat of ska and fell in love. That was the initial stimulus for Rodigan’s becoming enthralled by Jamaican music, which developed into a career that has been going strong for four decades.

The award-winning British broadcaster and sound-system maestro, told The Sunday Gleaner, “This incredibly energised genre – ska, from Jamaica – was primarily dance music, but then when looked at deeper, it was a music that spoke for all of us, especially the underprivileged in society – many of us identified with it – and so the phenomenon of Jamaican music grew beyond the shores of the island and soon reached the world stages,” Rodigan said.

The broadcaster credits that growth and some of his own success to the music and the performances of the iconic reggae stars who were present throughout his career. The hallmark of Rodigan’s career has been his passion and encyclopedic knowledge of all things reggae.

“I think the formula for success in any vocation or profession is to be attentive to detail – the kite flies because of its tail. There is no short cut to learning, so in order to be good at what you do, you must have knowledge. If you don’t know about something, then ask someone who does, or do your research,” he said. “It’s only by digging that you unearth things. Information is the key to success. Being ‘informed’ puts a professional in a position to comment and make judgments on what is worthy to be given praise.”

And Rodigan has received his fair share of praises. Over his decorated career, he has won various accolades including ‘Broadcaster of the Year’ and being inducted into the Sony Radio Hall Of Fame. He was also awarded the Member of the Most Excellent Order of the British Empire (MBE) for services to broadcasting at the Buckingham Palace. This, among other awards, has made him one of the most sought-after international entertainment personalities.

He notes: “As broadcasters and deejays, whether on radio or in clubs, our first duty is to the audience who listens to what we play and what we say. We are companions to our listeners, so it is important for us to always treat them with respect, and people will always listen to people who know what they are talking about.”

In June, Rodigan will make his first appearance at North America’s premier reggae and R&B festival – Groovin’ In The Park at Roy Wilkins Park in Queens, New York. He is booked for a segment billed ‘David Rodigan – Celebrating 40 Years in Reggae Music’.

“I have heard great things about the vibes at Groovin’ In The Park, its focus on good music and great artistes from the world of reggae and soul. It has a broad spectrum, and it attracts a mature audience, so naturally, I am really looking forward to entertaining the people with a vintage song collection and a sprinkling of my vintage dub plate specials,” he said.

“I take pride in coming up with classic songs with the emphasis being on reggae, but be assured there will be some special musical memories. I won’t be flying across the Atlantic to mess around,” he shared.

You cannot talk about Rodigan’s 40 years in reggae and radio without mentioning local broadcaster Barrington ‘Barry G’ Gordon, who is dubbed ‘The King of the Airwaves.’

Both masters of their craft, they brought sound clashes to radio via a series of historical on-air clashes in 1985. Prior to this, sound clash – a cornerstone of Jamaican music and culture – was reserved for the outdoors, and Rodigan was a phenomenal act in clashes throughout the ’80s and early ’90s, with established sound systems like Killamanjaro, Stone Love, and Bass Odyssey. “I don’t think being a clash DJ is necessarily an essential part of being a good radio DJ, but it has enabled me to be at the vanguard of change and helping to promote new music and new artistes. New talent is essential to keep our music fresh, and for it to continue to grow, we need to encourage that talent.”

The broadcaster says that being a clash DJ has given him an added edge because he spends a great deal of time accessing new music before they become popular. He takes pride in stating that he played a part in promoting reggae music and the various subgenres over the past 40 years.