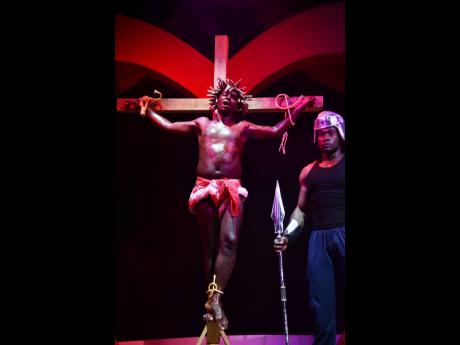 The support and audience reaction to the staging of Jesus Christ Superstar seemed not only to have served as a confidence booster for executive producer Andre Dixon but re-emphasised the dire need for a performing-arts centre in Montego Bay.

Near to being sold out on night one, the two-day Broadway musical, staged April 13 and 14 at the Iberostar Suites, saw lead roles being played by super talented youngsters who made their parts believable, receiving a standing ovation.

The feedback was positive from a discerning audience, which included some of the country’s best theatre critics.

“It was an excellent production, which I thoroughly enjoyed. The actors were well trained, extremely professional and passionate about their craft,” stated veteran entertainment director and producer Weston Haughton.

Haughton, who has produced several musicals and is now a franchise holder of the Miss Jamaica World pageant, said it was pleasing to note that the cast was mostly, if not all, from Montego Bay.

Andre Dixon, who surrounded himself with an A-team, which included First Dance Studios, Edna Manley graduate Vinton Haughton, and former Cathy Levy Little People Club member Antonio Dennis, told The Gleaner that preparations for the show took a mere eight weeks – half the time usually dedicated to a musical of that magnitude.

The actors included many seasoned performers, as well as high-school students, some of who emerged from their shells on Saturday night.

“There are people who are known for singularly being vocalists in the Montego Bay area that aren’t necessarily actors, so it took a lot for us to bring some of them up to the level that we wanted them to be at. I think what our audience saw was the beginning of talent like this being utilised here,” Dixon said.

As for the stage setting itself, Jamaican stage lighting design expert Robin Bastion was brought on board to ensure that the lighting was perfect. Technically, he said, there were some glitches in the first half, but these were ironed out, resulting in a more profound second act from a theatrical standpoint.

“ Jesus Christ Superstar is not an easy play to put on because there are so many factors that go into this. It has to be great choreography, it has to be great harmony, a number of the scenes have vocalists who have solos, so the lighting has to be excellent,” he explained.

For Dixon, the second half, particularly the crucifixion, was the most intense for the audience.

“As the executive producer, I sat in the audience myself, where I would be able to give the critique from that standpoint as someone who is also involved in producing and as an audience member. And as I was sitting around, I saw certain people crying. It was as if they could feel that moment. That’s what let us know that we had really reached the crescendo of what we wanted to achieve in the show,” he said.

“This is certainly Broadway show calibre, and we look forward to it on an annual basis. But this is also why we need our home theatre in Montego Bay. We thank the hotels for allowing us to do this, specifically Iberostar, but we would not have to put up with the constraints of anyone if we did have our own performing-arts theatre,” Dixon added.

Secrets Resorts’ entertainment director, Delrose Bahadure, who was among those at the showing, lauded the stagecraft as absolutely awesome.

“The acting was on point, and the singing was amazing. It was inspiring to see all the talent coming out of western Jamaica,” she said.

Judas, played by David Feare, received the loudest applause.Mary, played by 20-year-old soprano Janeel Mills, was a winner, and Jesus, in the form of Francois Medley, who has a wealth of experience both locally and internationally, captivated the audience.

The show moves to the Courtleigh Auditorium in New Kingston on May 18 and 19.