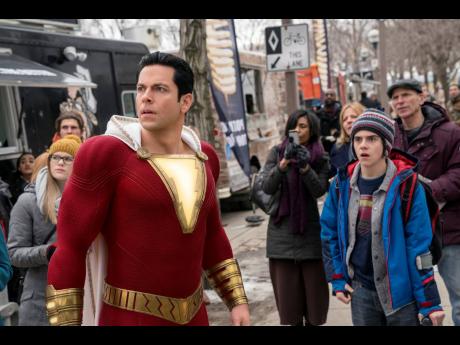 AP
Zachary Levi (left) and Jack Dylan Grazer in a scene from ‘Shazam!’

What if you could have superpowers? That’s the question of most superhero fiction, and it stems from a fantasy many people have to do amazing things. Most people grow up accepting that they won’t be bitten by a radioactive spider or, in the case of Shazam!, summoned by a mystical wizard. But for Billy Batson, the main character of Shazam!, the fantasy of becoming a superhero is his new reality.

Cinemagoers might ask themselves if we truly need another superhero in the midst. That’s a fair question, considering there are films about everyone from Ant-Man to the X-Men. It’s even more reasonable, considering that not much differentiates Shazam! from Superman. How many caped men flying through the sky does the world need? Shazam! earns its place by offering up a unique perspective and for the first time in years, giving us a protagonist who seems to genuinely enjoy being a superhero. That’s an achievement these days since the Man of Steel became morose and half the Avengers turned to dust.

Shazam! is a film with a very well done script. It clearly establishes its characters and their motivations and delivers a satisfying and emotional arc for them, all while having an impeccable balance of tone between the whimsical and the dramatic. The first act gives us two stories in one. The first is about a young Thaddeus Sivana, whose brush with the mystical sets him on a lifelong path to prove his worth. When he finally gets his chance as the evil Dr Sivana, the forces of good must find a champion of their own.

Enter Billy Batson, an orphan desperately trying to find the birth mother from whom he was separated years ago. When he stands up to a set of cartoon bullies tormenting his new foster brother, he gets called upon to accept the powers of Shazam!

Although Shazam! has a well-balanced script, there are several clichés that plague the film. When testing out his superheroics, Shazam stumbles upon not one, but two violent crimes happening before him. I suppose them taking place in a convenience store was fitting. The bullies who Billy initially stands up to are also exaggerated stereotypes. However, the movie is so endearing, you almost want it to hit a few more tropes just to see how Shazam does it. Not bad for a new superhero.