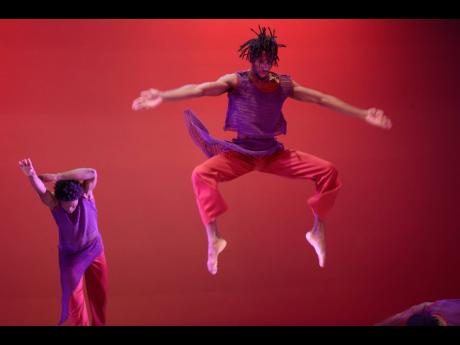 Shorn Hector
Members of the NDTC performing “Inward Stretch Outward Reach” at A Morning of Music and Movement 2019, held at the Little Theatre on Easter Sunday.

On Easter Sunday, one of Christianity’s holiest days, the National Dance Theatre Company (NDTC) continued its tradition of celebrating the season with an early-morning feast of movement and music. The 38-year-old show saw new pieces in music, but most of the dances were remounts from the company’s repertoire. These pieces were carefully chosen, and, as Marlon D. Simms, NDTC’s artistic director, explained, “Last year was my first Easter morning, and I wanted to take the audience through a journey of moving from darkness into light. And this year, I want to take them from a place of reflection into a place of hope and encouragement and sunlight. At the end (the closing dance), the sunrays come on stage, so they leave with a feeling of hopefulness, renewed faith, inspiration and joy.”

Fittingly, it started with The Hallelujah Chorus from Handel’s Messiah. It was a combined performance, with the NDTC singers making their entrance through the audience, and the dancers from the wings. Together, they gave a fine performance, setting the tone for the remainder of the programme.

Gene Carson’s 1996 choreography Cry of the Spirit was next. Choreographed to Sandy Patti’s version of Amazing Grace, soloist Kerry-Ann Henry danced the pain and suffering of the slaves into life. Chris Walker’s Yallahs, the only new dance on the programme, was performed by the company, with Henry and Kemar Francis in lead, and illustrated a creative juxtaposition between lighting and choreography.

The influence of the late Professor Rex Nettleford, who laid the blueprint for the Easter concert, was showcased through two excerpts from Blood Canticles (1996) and the well-danced Psalm 150. Simms’ uptempo Homeland (2005) also contributed to the mood in movement and costumes. Clive Thompson’s Vision (1995) was presented as a tribute to former NDTC dancer Christopher Morrison. The piece was beautifully danced by Javal Lewis and Ashley Bromfield. The ending was quite dramatic, too. Kevin Moore’s Inward Stretch Outward Reach (2012) completed the list of dance and choreographers.

The singers and musicians were not to be outdone. Guided by acting musical director Dr Kathy Brown, they took command of the stage with powerful vocals and appropriate formations, as a group, soloists and duos. Faith Livingstone and Kimone Johnson delivered a fine rendition of Andrew Lloyd Webber’s Pie Jesu, but it was Joshua Page who preached the sermon with the Travis Greene and Kathy Brown-arranged You Made A Way. The message was received by the almost full house.

Stephen Davidson, who was part of the audience, remarked, “It is something I look forward to. It is a great show, great songs, and great way to start off the Easter Sunday.”

Next on the NDTC agenda is the 2019 season of dance. Simms promises a season of modernity coupled with nostalgia.