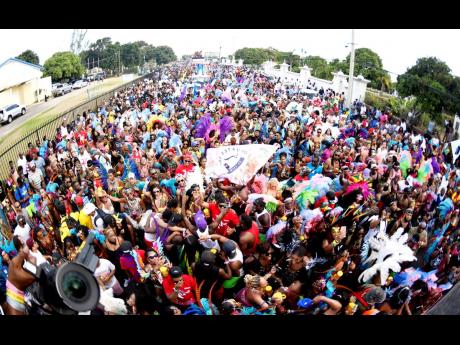 This year’s carnival activities are believed to have pumped more than J$1 billion into the Jamaican economy. Kamal Bankay, chairman of the National Carnival in Jamaica stakeholders committee, under the Sports and Entertainment Network of the Tourism Linkages Network, said that the events continue to grow each year, “and this year, we expect about 9,000 revellers and over 40,000 spectators”.

The number of visitors who have turned up on the nation’s shores for Carnival 2019 has increased, compared to last year, and this has organisers confident that the yearly event will contribute significantly to Jamaica’s robust arrival figures and earnings.

The tourism ministry said that last year was the biggest carnival in Jamaica’s history, and preliminary indications are that Carnival 2019 will be bigger. The parade has grown from just over 2,000 persons in 2016 to 6,000 persons in 2018.

“This year is already running well ahead of last year, with even more foreign visitors and notable uptick in visitors from the Eastern Caribbean. Jamaica is now cementing itself as a major soca stamping ground,” said Delano Seiveright, senior strategist in the Ministry of Tourism.

“It shows the dynamism of our destination and falls fully in line with Minister Edmund Bartlett’s drive to aggressively grow the industry and ensure that more of the tourism dollars spent in Jamaica stay in Jamaica. Millions of dollars have been pumped into Kingston alone over the last several days into this weekend, spreading far and wide from taxi driver, hairdressers and make-up artists to hotels, restaurants, bars, and grocery stores,” he said.

At the same time, Bankay, who is director of Xodus, one of the carnival bands, said that in addition to the hotels and restaurants, smaller entities such as the jerk vendors and bus and taxi drivers have been befitting from the carnival festivities.

“Just about anyone in the hospitality field will benefiting from carnival in Jamaica. There are tourists who will be staying in Jamaica days after the events end. It is safe to say that Kingston is completely sold out ... every hotel and rent-a-car is all gone. Every flight coming into Jamaica now is jam-packed. People are coming from as far as Africa to be here. There are hundreds of vendors on the road who will make a living from it,” he said.

“The bars, hairdressers, nail technicians, and clothes and shoes vendors are not to be left out as they, too, will be making a spin-off. On the day of the road march, there will be about 4,000 private security personnel and other persons who are hired, so they will be making an income as well. Then there are the production companies and the livestock farmers,” Bankay said.

Assistant Commissioner of Police Terrence Bent said that the safety of revellers and other patrons is high on the police’s list. The senior cop said that there would be an extensive deployment of police officers for the parade and is urging revellers and spectators to obey the commands of the police, who, he said, are there to ensure that the event is safe and incident-free. Included in the pool of officers deployed will be a special counter-terrorism team.

“The event is not known to have any terrorism threat, but we have seen, in recent times, when there are festivities worldwide, that there have been attacks. So we are not taking anything for granted. The police will be looking out for strange packages and bags and other stuff. We are also urging the public to look out and report to the police anything at all that looks odd,” Bent said at a press conference on Friday.