Men want feathers, too - Carnival is not only for women, say male masqueraders 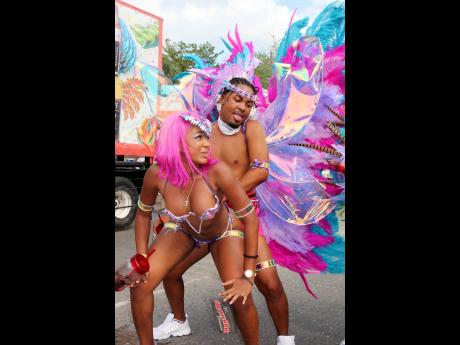 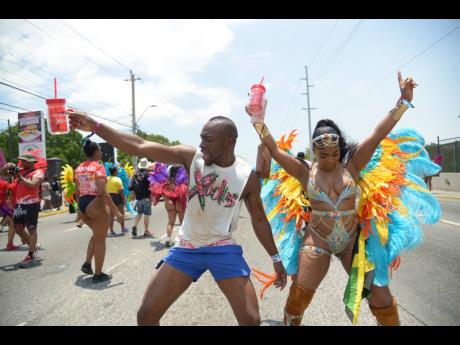 Shorn Hector
Fitzroy and Kamara enjoy the music along the Xodus route. More men are demanding more than the ordinary to chip down the road on carnival day.
1
2

Trinidadian recording artiste Fay-Ann Lyons, in her song Girls, sings, “Carnival is woman, carnival is girls, girls, girls”. But, masquerades across the globe have harvested greater support and interest from men with each staging.

Many men are looking to dress to the nines in brightly coloured costumes and lavish feather backpacks, and according to costume designer Audriana Michelin, a greater number of men have ­contacted her following ­yesterday’s road march.

“A lot of the men are not fans of the material that is normally used by the bands because it resembles swimming shorts – the thin and stretchy fabric – and there are those who want something that has a more masculine feel to it,” Michelin told The Gleaner.

She added, “Persons saying the men wearing costumes are usually homosexuals are not accurate. It is true, they are more flamboyant, but some of my male friends are just fascinated with the wings.”

The emerging designer utilised stretch twill in bright colours that added to the festive mood of the road march, but ensured that male revellers were satisfied with the way their costumes fit. “The carnival community is tight, so information is shared easily, and I ended up making six male costumes, headpieces for others, and shorts for another set this year, which is ­actually my first time,” she explained.

Marketer and soca junkie Cavell Morgan, who has marched with Bacchanal Jamaica for the past five years, told The Gleaner, “Over the years, the carnival bands have underrated the loyal male carnival lovers, but there has been an improvement in terms of the items provided for the money being paid. It would be nice if we could have more designers who are willing to cater to men develop partnerships with the bands.”

Morgan wore one of Michelin’s designs – a psychedelic PVC ­‘creation’ accented with purple, pink and blue ostrich-sized ­feathers, resembling a butterfly or fairy, which was the inspiration for it.

“The more designers available to conceptualise costumes for us (men), the more persons will see and create that effect for others to catch on,” Morgan said.

O’Neil Dempster is a reveller who ordered a yellow-shorts-and-headpiece combination from Michelin. He was happy with the end product. “The costume is too amazing to describe. It is one of the best I have worn, and I have marched with carnivals in other places. I recently returned from marching with the YUMA band in Trinidad, and it was phenomenal, but the costume did not compare,” Dempster said.

Dempster and Morgan relate that male revellers are viewed differently in the twin-island republic. “Carnival is not only about women and girls; there are bold men who want to march but are probably only afraid of what people might think of them,” he said. “Jamaicans need to get over that fear and get over it fast because it is the best playground to fall in love – man or woman,” added Dempster.