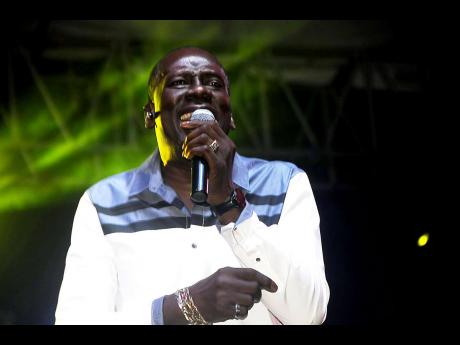 When St Luke’s Church in Cross Roads hosted the inaugural staging of their Reggae, Jazz & Blues Go Gospel fundraising concert, there were persons who were a bit uncomfortable with the idea. Not surprisingly, it was some of the congregants who raised eyebrows at the thought of the church being a close part of what is considered secular genres. In fact, when reggae singer Ernie Smith was named to headline the second staging in 2015, it caused a bit of a storm in a teacup.

“The problem was that Ernie has a song called Duppy Or Gunman and persons were a bit concerned that he would sing that song at a church function,” the event’s marketing manager, Nola Phillpotts-Brown, who can now look back and laugh, explained.

What those persons didn’t know is that Ernie Smith, in addition to his extensive secular repertoire, is credited with doing the very first dancehall gospel song, All For Jesus. Also, he has an entire gospel album, released in 1999, titled I’ll Sing For Jesus, which boasts Christian staples, including I’d Rather Have Jesus, Take My Hand Precious Lord and Lead Me Oh Master. As it happened, Ernie, the consummate professional, went to St Luke’s and did a mini pre-show presentation, which was totally on point. His selection of songs comforted all those who had been disturbed.

Four years after that incident, Reggae, Jazz & Blues Go Gospel is still going strong, and this year’s sixth staging, on May 5, will showcase the talents of reggae singers Luciano and Leroy Sibbles, Judy Mowatt and Marjorie Whylie.

According to Phillpotts-Brown, popularity and appropriateness play a huge role in the final selection of the performers for the church’s flagship event. “Also we want artistes who will attract people outside of our church family to come and attend. We also use this as an opportunity to minister to persons and, of course, we cannot minister to the converted,” she said. Last year, the number of patrons fell short of the one thousand mark. This year, they hope to surpass that.

While former I-Three member Judy Mowatt has fully embraced the Christian lifestyle and her reggae-influenced, gospel songs are church-endorsed, the repertoire of Sibbles, for example, may not fit quite so snugly into this cache; however, Phillpotts-Brown assures that the message through the music is what counts.

“The presentations will be in the reggae, jazz, or blues genre using inspirational songs, some of which will be gospel,” she explained.

Party Time singer, Leroy Sibbles, who was full of praise for St Luke’s for staging this event, and also for inviting him, says that he will be doing what he calls social songs and perhaps one gospel song.

“It will be a beautiful evening of giving thanks to the Lord,” the legendary reggae singer told The Gleaner. “I will be doing a clean show, but then again, I have never done a dirty show,” he said with a laugh.

Although he has not yet made the final selection of songs for the concert, he says that his signature Party Time is sure to be somewhere in the mix. As for the gospel song, he wants to keep that secret.

Phillpotts-Brown notes that the Reggae, Jazz & Blues Go Gospel series of concerts is one of the main sources of funding for the church’s several outreach programmes that benefit the residents of Cross Roads, Jones Town and other surrounding communities. These include the weekly feeding programme for more than 300 street and ageing poor persons; hosting a free annual health fair, operating the St Simon’s Basic School in Jones Town; and providing financial and other assistance to needy students, the ageing poor and residents of Cross Roads and surrounding communities.

Reggae, Jazz & Blues Go Gospel – Act VI, will be held at the Karl Hendrickson Auditorium, Jamaica College, on Sunday, May 5, starting at 5 p.m.