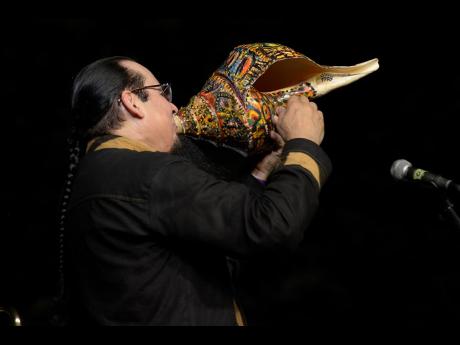 Shorn Hector
American jazz trombonist Steve Turre with one of his extravagant shells. 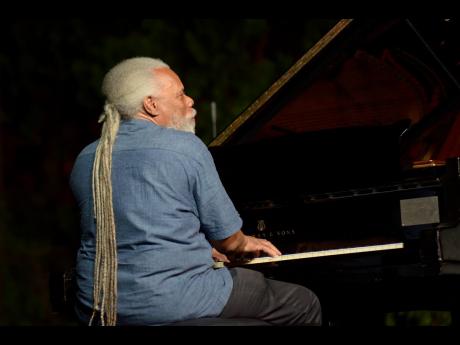 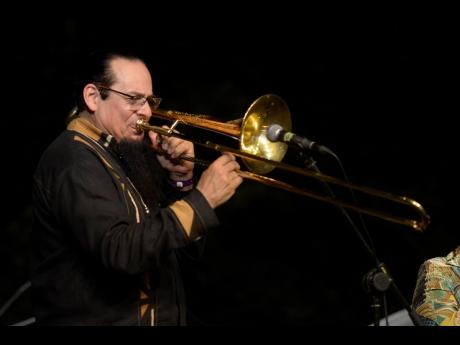 Shorn Hector
The multitalented Turre displaying his skills on the trombone. 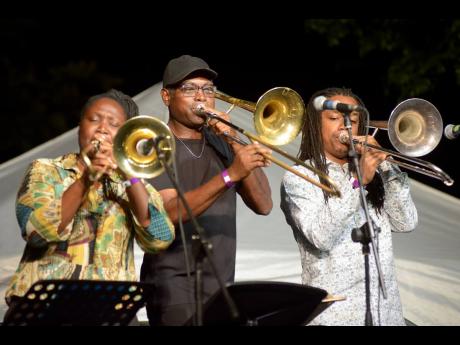 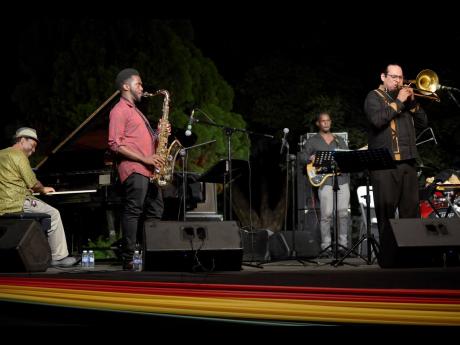 Fans of jazz who gathered on the east lawns of the iconic Devon House on Waterloo Road in St Andrew were treated to a feast of pure and avant-garde jazz, in celebration of International Jazz Day 2019. Organised by the Edna Manley College of the Visual and Performing Arts, the performers comprised staff and students of the School of Music, and special guest Steve Turre.

Turre proved to be the perfect fit for the Caribbean’s flagship arts institution. Armed with a bag of seashells, among other gadgets, and a trombone, the American jazz trombonist evoked a wide range of emotions. Three of the pieces were Trayvon Blues, Sonny Rawlins, and St Thomas.

Trayvon Blues was a journey through pain and fear. It is influenced by the story of Trayvon Martin. “My son could have been Trayvon,” he told The Gleaner. “My son is African-American, he got nappy hair. That could have been him walking home one night … and that stuff’s still going on. So I wrote the song because it moved me. That poor kid didn’t do nothing, and he got shot. So the song came to me, that’s the story behind it.” The moving composition ended with seashells blown to echo the screams of the terrified teenager.

Turre skilfully shifted gear to the popular and livelier St Thomas, with a nice conversation between trombone and saxophone, played by Oshane Love. However, his most creative use of the seashells came in the Myles Davis-composed All Blues. Moving from the standing microphone to the open piano, he held the audience captive with his creative antics. He told The Gleaner the skills are self-taught. “I used to play with this wonderful saxophone player Rahfaan Roland Kirk – he played three saxophones.” He said Kirk would play them individually, and at times together. He would also play sounds on everything. “One day he brought a shell to the gig, and he blew it. The tone was so pretty that I fell in love with it.” Turre got his first shell in 1970, and taught himself how to play it.

Turre, who is married to a Jamaican, also had fun with Don Drummond’s ‘fun piece’, Confucius. He learned about Drummond from Herbie Miller in 1982. “I was a fan immediately,” he said.

He was given strong support by Jamaican greats Desi Jones, Ibo Cooper, Ozone and Dale Haslam. Ibo Cooper’s ska-jazz gave a feet-stomping head-shaking performance of a version of Duke Ellington’s Caravan, called Ska-Caravans. Not to be outdone, the students, via the EMC Vocal Jazz Ensemble, had audience participating with their original, The Brighter Day. Jon Williams delivered an unforgettable We are in this love together, to his wife.

There were also performances from Ian Hird, Michael-Sean Harris, Orville Hammond and Raphael Salazar. Minister Olivia Grange, who addressed the audience, said the celebration is acknowledging the power of music in bringing people together – a celebration of jazz on Jamaica’s music, and the contribution of Jamaican musicians to jazz. She also promised that next year’s concert will be bigger and better.