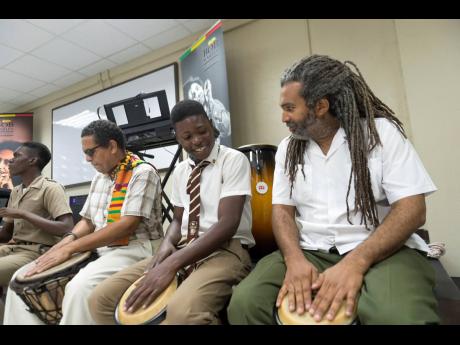 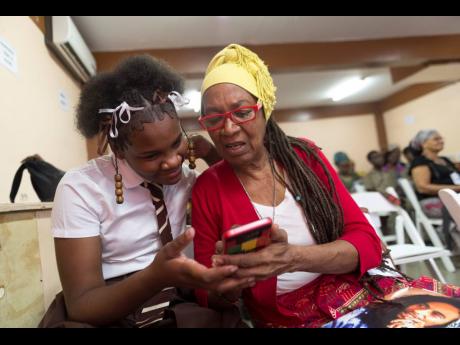 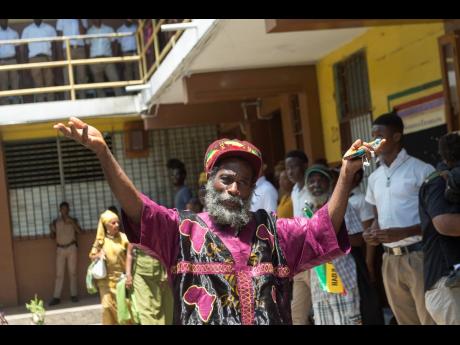 Ras Ivi-Tafari urges the students to lift their voices as they sing the school song at the celebration of the institution’s 50th anniversary. 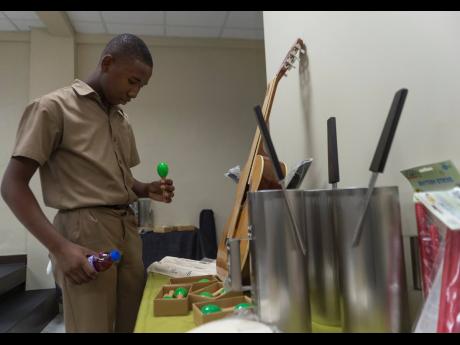 Jordan Perry looks at a shaker, one of various new instruments in the newly opened Marley Music Room. 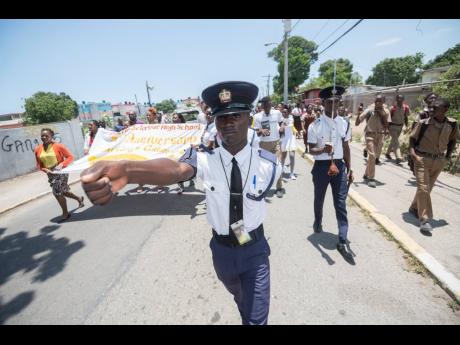 Gladstone Taylor
Cadet inspector Richard Hall of the National Inter-school Brigade marches ahead of the students and staff of the Haile Selassie High School as they celebrate their 50th anniversary.
1
2
3
4
5

In celebration of their 50th anniversary, Haile Selassie High School’s music and performing arts programme has received a facelift. Thanks to the Bob Marley Foundation, the students and their music teacher, Tino McDermott, can now gather in the corner room on the campus’ third floor in an air-conditioned space that is completely shielded from the elements.

“For me, words can’t explain it. It is a dream come true, because before up there used to leak. There was water coming in. But now, I can see my way out much better,” McDermott told The Gleaner. In addition to the renovation of the music room – the Marley Music Room – the music and performing arts programme was enhanced with additional musical instruments, donated from proceeds earned by a partnership between the Bob Marley Foundation and Raymond Weil, the Swiss jewellery and watch brand.

At McDermott’s request, the inventory has increased from just a handful of conga drums to an assortment of recorders, acoustic guitars, tambourines, rhythm sticks, guiras, maracas and two keyboards. The music room now also holds a refurbished stage, where the student musicians and theatre artists can comfortably hone their skills.

At the school’s golden jubilee celebration last Tuesday, which included a handover ceremony of the Marley Music Room to the school, a collection of drummers, led by head boy Sherome Bainbridge, opened the day’s proceedings. Bainbridge was initially apprehensive about attending the school, but after spending a few years around the once-dilapidated music room, he has come completely into his own.

One thing the young man ensured to keep with him before starting his secondary education was his love for drama. He also took an interest in drumming, an activity his primary school didn’t offer. “Since I started Haile Selassie High School, I started playing the drums and going to JCDC to perform,” Bainbridge said.

The following year, as an eighth-grader, the drumming core he was involved with started visiting the Bob Marley Museum. There, he got the opportunity to meet and interact with people from all walks of life, from all over the world. The visits afforded Bainbridge the opportunity to attend Bob Marley Foundation’s One Love Youth Camp, where he discovered unknown parts of himself, ultimately gaining confidence. “I was shy, but then I started to talk, sing, dance, things I didn’t usually do,” he said.

Bainbridge led another item by his classmates, singing the chorus of Bob Marley’s No Woman, No Cry to support his colleagues’ spoken-word performance. His shyness did not show.

According to Sister Mitzie Williams, communications manager at the Bob Marley Foundation, this project with Haile Selassie is the most recent of the ‘Marley for Music in Schools’ mission.

In September 2016, the first Marley Music Room was opened at the GraceKennedy/Parade Gardens Science, Technology, Engineering and Mathematics Centre on Water Lane in Kingston. In May 2017, they launched the Bob Marley Ensemble Room at the Alpha Institute. Haile Selassie High School is their third stop.

Principal Lorenzo Ellis believes that the refurbished creative space will have a lasting impact on the students, just as performing arts helped with Bainbridge’s confidence. Dean of Discipline Joseph Heron welcomed the Marley Music Room, as he believes the students of Haile Selassie can utilise the space to better express themselves, and hopefully to reveal talents to be nurtured. “Behaviour modification is enhanced by music,” he opined.

Though Bainbridge is leaving the school soon, he expressed joy at the next crop of music and drama students getting their own space to practise and interact with like minds, while thankfully keep dry from the rain.