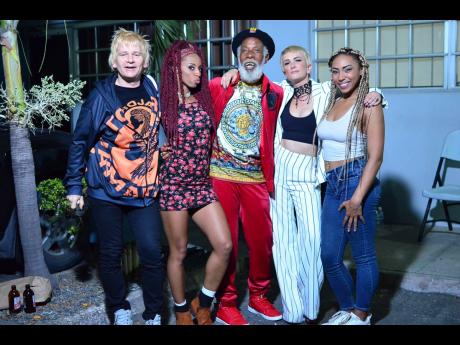 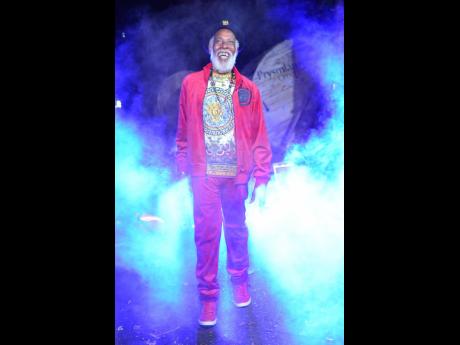 Contributed
Big Youth in a scene from the accompanying video for the Trojan Jamaica song ‘Gunslinger’. 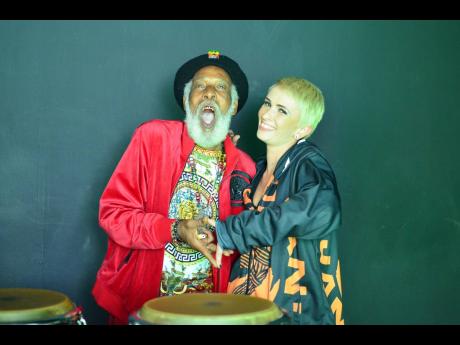 Contributed
Big Youth and Sshh on set of the video shoot for ‘Gunslinger’.
1
2
3

In the convoluted world of entertainment, there are still some small things that are no-brainers. For example, if when choosing a moniker, everybody around you is constantly trying to silence your chatter by telling you to “shush”, then it simply has to be ‘Sshh’. Interestingly, in the theatre world, the interjection ‘sshh’ is banned because it makes the most noise. However, the only ‘ban’ that the real-world Sshh knows is that she is the member of a punk rock band.

The rather talkative and engaging Sharna ‘Sshh’ Liguz and her partner, Zak Starkey, are currently in Jamaica on a special mission. They have rather ambitious plans for Jamaica’s music, which involve taking reggae where reggae hasn’t gone before. Starkey and Sshh are so excited that they want to do it all now. Their plans involve developing a record company, releasing singles and albums, and even taking the legends on tours because they know that more global appreciation is needed for reggae music. And their team is equipped to do the job and do it well.

And just in case anyone might be thinking that Sshh and Starkey see themselves as caped crusaders or white gods who have been anointed the saviours of reggae music, they should ditch that thought. “Oh no, no, no!” Sshh shouted with a flury of gesticulations. Pausing long enough to take a deep breath, she added, “Reggae doesn’t need saving. No ‘white saviour’ ting. I’m humbled in this scenario, blessed to be a part of the process. To be involved in all of this is a gift and a blessing,” she said.

Sshh was making direct reference to being on set for the video shoot of Gunslinger, a song produced by the duo and which features legendary reggae pioneer Big Youth. “We are championing these legends of reggae music,” Sshh said. And, truth be told, it’s about the younger artistes as well. “Rygin King is special. His delivery is different. I told him that, and he said, ‘I know’,” Starkey said in his best Rygin imitation.

However, the big picture for Starkey and Sshh involves their new record label, Trojan Jamaica, which they operate from their Ocho Rios base, where they have set up a studio. The name alone is a big deal, considering the history of Trojan Records, which was instrumental in introducing reggae to a global audience. Trojan Records was founded in 1968 when Lee Gopthal pooled his Jamaican music interests with those of Chris Blackwell’s Island Records. Blackwell subsequently withdrew Island Records’ interests in Trojan, and the company has changed hands several times. In 2007, Universal Music Group (UMG) took control, but in 2013, they sold their Trojan back catalogue to BMG, which is co-funding the Trojan Jamaica label. It has licensed the name for use from the 50-year-old Trojan Records label for the new venture.

As Starkey explained in a Rolling Stone interview, “We had recorded over 40 songs and decided to start a label in Jamaica to release them. We had a logo but no name. Turned out nobody owned the rights to Trojan Records in the West Indies, so we got it and took it home.”

Chilling on the outside after shooting his scene in the video, a dapper-looking Big Youth was the embodiment of statesmanship and graciousness. Dressed in full red and showing off his gold-capped teeth as he smiled, the reggae great told The Gleaner that the project with Trojan Jamaica “created the opportunity for planting our seed in the industry”. He continued, “These people are pop rock; they don’t take reggae lightly. They don’t take Big Youth lightly either.” His eyes lit up as he shook his right index finger.

According to Big Youth, there is a lot of merit in the work that Starkey and Sshh are doing, especially since it allows artistes like him to reach a whole new generation of fans.

“That’s the way to go about it,” Big Youth said in full endorsement of the project.

It was clearly a mutual-admiration club because Starkey, too, had plaudits for Big Youth. “He is dignified,” Starkey stated, still looking and sounding a bit awed. “His personality just got sucked into the cameras. It was awesome, it was surreal,” the drummer son of Ringo Starr said of the video shoot for Gunslinger.

Big Youth, whose last solo music video (cameos aside) was in 1985 with the song Where Were All Dem Boys, is embracing all the good that is falling into his lap. Asked if he had signed a contract with Trojan Jamaica, the entertainer, who recently celebrated his 70th birthday, said that that discussion was not on the table but that if and when it comes, his lawyer son, Isat Buchanan, of whom he is very proud, would deal with all the paperwork.

“When we see a contract, we know that we have to track the ‘con’,” a very lyrical Big Youth said, going on to give a crash course in English. “Look at all those words with ‘con’: control, convict, congratulations, convince, conspire, convenient. Just check them out,” a serene looking Big Youth said while giving kudos to Starkey and his team.