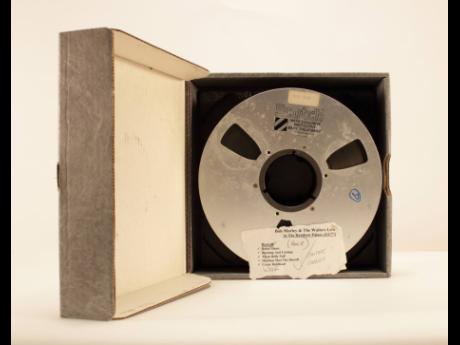 Contributed
Reel #1 of the lost tapes.

A cache of long-lost Bob Marley live recordings, which lay in a damp basement for 40 years, is to be auctioned after being restored. Experts predict the 10 two-inch ‘reel-to-reel’ 24 track analogue tapes could easily raise hundreds of thousands of pounds when collectors and fans worldwide start bidding as they go under the hammer.

These iconic recordings were miraculously saved from destruction at a London refuse dump when they were discovered during a London hotel clearance – in the basement. The reels, with the digitally restored audio, are split into three lots, based on Marley’s historic 1970s live performances at the venues where they were recorded: The Lyceum and Rainbow venues in London (1975-1977), and The Pavillon Baltard in Paris (1978). They will be auctioned in Merseyside, England on May 21, 2019 by Omega Auctions.

Bob Marley, the superstar, created a strong link to Liverpool’s musical history by playing at The Cavern Club as part of The Wailers’ ‘Burnin’ Tour – back in November 1973.

These tapes were first dubbed ‘The Lost Masters’ by Island Records founder Chris Blackwell back in the ’70s – when the tapes mysteriously disappeared off the company’s radar. They are said to contain many of Marley’s greatest hits such as No Woman No Cry, Jammin’, Is This Love? and Exodus.

Auctioneer Paul Fairweather said, “The Bob Marley original live recording multi-track reels will be among the most high-profile items Omega have dealt with to date. These iconic recordings are from a point in time when Bob Marley was really at his peak and with him having such a huge fan base, we expect there will be worldwide interest.”

These lost and still unmixed master recordings were discovered – severely water-damaged in cardboard box files – in a damp hotel basement in Little Venice, North West London, where Bob Marley & The Wailers stayed during their early tours of Europe in the mid ’70s, and were originally thought to be ‘too damaged and beyond repair’.

But thanks to brilliant modern-day restoration technology, the reels have now been successfully restored to their former audio glory, and the restoration has since been heralded as ‘one of the greatest restoration projects in music history’.

The concerts were recorded on the only mobile studio vehicle in the UK at the time loaned to Marley & The Wailers by The Rolling Stones.

Joe Gatt – the London businessman who rescued the reels from destruction at a refuse disposal dump in London, said, “I received a call from a friend telling me he was doing a building refuse clearance that included some old discarded 2-inch tapes from the 1970s – with ‘Bob Marley Live’ and other notes scribbled all over them. Being a big music fan – who strangely enough was actually in the audience at one of those historic Lyceum Marley dates – I couldn’t just stand by and let these sacred treasures, damaged or not, simply be destroyed as mere trash ... so I told him to take them off the truck.”

Gatt, from South East London, then passed the master recordings on to his singer-producer friend and neighbour, Louis Hoover, at London International Productions.

Jazz artist Louis Hoover, from Willesden, North London, and regular headliner at Ronnie Scott’s Jazz Club, said, “When I finally saw the labelling and footnotes on the tapes, I could not believe my eyes – but when I also saw how severely water-damaged the reels were, it was pretty gut-wrenching – as there was plasticised gunk oozing from almost every inch – so saving the sound quality of the recordings looked pretty hopeless.”

Reggae historian and artiste manager, Copeland Forbes, says it is the responsiblity of the Marley family and not the Government of Jamaica to retrieve the tapes, if they so desire. He states, however, that although the tapes should be preserved in a museum, there is nothing that anybody can do if the estate is not interested.

“Things like these don’t automatically belong to any government ,and if the estate is not interested in retrieving it, then there is nobody who can step in and do anything about it,” Forbes told The Sunday Gleaner.

He gave as an example Peter Tosh’s famous M16 guitar, which was up for auction in Negril, Jamaica, in 2006, and which he was instrumental in saving.

He stated, “When Peter Tosh’s M16 guitar was about to be auctioned off in Jamaica at a film festival in Negril, I was in Switzerland with Gregory (Isaacs). I got the call from somebody in Jamaica, who just happened to be at the meeting when the auctioning of the M16 guitar was being discussed,” Forbes disclosed. “I called the BBC, CNN and Mutabaruka in Jamaica and told him to bring it on his programme. I knew the history of the guitar because I was there at the hotel in the Franklyn Plaza when a youth in California brought the guitar and presented it to Peter. I knew that it belonged to the Peter Tosh estate, so whoever had sold it to the auctioneers had done so illegally. But the lost Marley tapes may be a bit different.”

Forbes himself subsequently made contact with the auctioneer, who, having heard and seen all the press, finally relented and pulled the instrument from the auction. He recalled that the revolutionary Tosh, who was amazed when he looked in the box and saw that this was really a guitar in the shape of an M16 rifle, stated, “Is now I going to shoot dem with di music.” The instrument is now in the Peter Tosh Museum in St Andrew.

The Marley estate could not be reached for comment.

– Yasmine Peru contributed to this story.