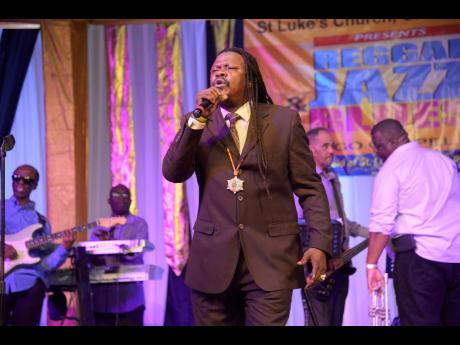 Lamenting that he has ‘never seen so much wickedness from the day me born,” the man named Jepther McClymont blasted “leaders who have missed the vision and purpose”. He added, “When the Government calls for a state of emergency, then it is really a state of emergency.”

Quoting scripture, amid calls for peace and unity, the Rastafarian entertainer told the largely churchgoing audience that Jamaica is teeming with ‘isms’, including racism and classism; and by their applause, it seemed as if they agreed. In between delivering his classic songs, he jumped off the stage to greet his fans and then turned over the Karl Hendrickson Auditorium on Hope Road by kicking off his shoes (but keeping on his jacket and tie) and somersaulting through the air. Then, as if he did nothing spectacular, Luciano calmly segued into Your World And Mine, It’s Me Again Jah, knelt as he recited the Our Father prayer and did his signature song, Lord Give Me Strength.

In keeping with the mood of his audience and the theme of the event, Luciano injected Christian favourite I Come To The Garden Alone, and also transformed himself into the leader of the praise- and-worship team as he reeled off a rousing medley which included When The Saints Go Marching In and Give Me That Old Time Religion. He had the ‘saints’ on their feet singing, clapping and dancing as they showed their appreciation for the messenger and the music.

While Luciano was the final curtain-closer, it was veteran reggae singer Leroy Sibbles who brought the first half of the show to a resounding climax, with what he said was his favourite gospel song, Oh Happy Day. And Sibbles did such a great job with this song that his audience literally would not let him go. It would have been a great idea if he had explored more gospel favourites, which showed off his range.

Prior to that, although he had acknowledged that this was not his usual Startime crowd, he gave the “nice, beautiful, God-fearing people” his Startime repertoire – Party Time, Book of the Rules, Sea of Love, Only 16 and Rocksteady. It was while doing the latter that MC, Fae Ellington took a mic and stated, “These church people don’t know what rocksteady is,” and then she and Frankie from Fab 5 shuffled their bodies and showed them the real rocksteady groove.

Earlier in the evening, the organisers had apologised for the absence of songbird Judy Mowatt, who was unwell. The singer chosen to fill her shoes at the last minute, Candy Isaacs, did a good job, sticking to a wholly gospel-flavoured segment which energised the crowd. Classical pianist Marjorie Whylie was at home and connected with the audience from she struck the first note.

The concert ended with the singing of Praise God From Whom All Blessing Flow.

Seminarians from the Missionaries of the Poor, who stood out in the crowd as they sat together in their flowing white robes, told The Gleaner that they thoroughly enjoyed the concert. Brother Avimas from India, who has been in Jamaica for six years, said it was his first time at St Luke’s fundraising concert and he would definitely be a repeat attendee.