Marley matriarch says ‘Who feels it, knows it’ 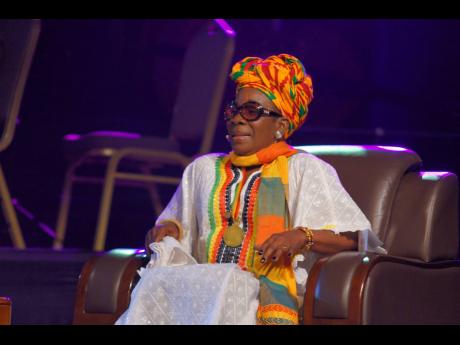 Reggae singer and ­philanthropist – matriarch of the Marley family – Rita Marley is often referred to as the ‘Mother of Reggae’ as she was ­married to the ‘Father of Reggae’, Robert Nesta Marley, and is the mother of some of this ­generation’s greatest reggae acts.

Recently, she has been keeping a low profile, recovering from an illness, that has affected her speech and movement. But the exclusive release of a limited edition vinyl of her most iconic songs titled The Best of Rita Marley – Lioness of Reggae may call for a greater presence from the veteran singer. The album was released via her son Ziggy Marley’s Tuff Gong Worldwide label on Friday, May 3.

Speaking with The Sunday Gleaner via email, she summed up her emotions, saying, “Who feels it, knows it,” which is also the name of her breakthrough album (released first on December 31, 1980 and officially in 1981), and the title track on the latest production, along with nine other hits, including One Draw, Harambe and A Jah Jah.

Most of the tracks that have been revived for the album were recorded during the period of the reggae singer’s booming solo career before she began touring as part of the I-Threes ­alongside Marcia Griffiths and Judy Mowatt, who also acted as Bob Marley’s harmony group.

She said that the album could not have come at a better time. “I have taught my children, ‘everything to its time’, and so I don’t question them about following their own inspirations. I agreed to it because he wanted to create a project that reflected what these songs meant to him and his generation,” she said.

It is “for a new generation of reggae listeners to find enjoyment in the album, and with it being available on many platforms, for the impact to be a positive one. That would be the greatest impact for any person to listen to my songs … to impact their lives positively.”

The Marley name is synonymous with reggae music and the local music culture that has resulted in a global impact, a phenomenon that the Cuban-born music lover Alpharita Anderson (Rita Marley’s birth name) could not have predicted in her childhood. Music ultimately led her to find love and meeting some of the genre’s most influential figures, including Peter Tosh and Neville ‘Bunny’ Livingston, who is credited as the songwriter for Who Feel It Knows It.

Did Rita Marley believe that her music was overshadowed by the sounds of Bob or these male reggae artistes? “Never! As I sing in one of my songs, ‘it takes a woman and a man to show the beauty of God’s plan’. We all have a role to play in this life, and when we do that, the world benefits,” she continued.

“As a woman in this industry, I see some references to the word lioness, having used my music to uplift, inspire, and teach others so that our community can continue to thrive and grow in a positive direction,” she said.

This album holds special ­meaning for her with a title that proclaims her the lioness of ­reggae. “The lioness plays a significant role in the jungle alongside the lion as the hunter and gatherer of food and, of course, brings forth and nurtures new life that allows the lineage to continue,” she said.