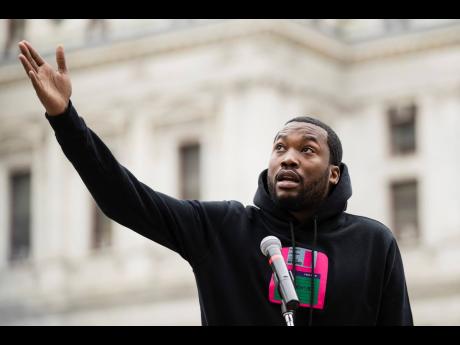 AP
Meek Mill speaks at a gathering to push for drastic changes to Pennsylvania’s probation system in Philadelphia. Mill has become a symbol for reform after a judge in Pennsylvania sentenced him to two to four years in prison for minor violations of his probation in a decade-old gun and drug-possession case.

In November 2017, 32-year-old rapper Meek Mill spent months in prison after he was sentenced to two to four years in jail for minor probation violations related to a 10-year-old gun and drug-possession case.

However, District Attorney (DA) Larry Krasner has argued that Common Pleas Court judge Genece Brinkley “abused ­discretion” and was biased against the star.

The DA’s office filed a brief questioning the judge’s “impartiality” on Wednesday, citing her decision to check in on Meek when he was doing community service at a homeless shelter and later criticising him for not doing more.

The attorney also claimed that the judge improperly referred to her own observations at a ­sentencing hearing and called for Meek to receive a new trial before a different judge as the court had “abused its discretion” when it “imposed” the jail sentence on the All Eyes on You hitmaker.

He had previously had a request for a new trial rejected but is continuing with his appeal efforts.

The judge has denied allegations she was biased against Meek – who was released on court orders last April – during the case.

Jay-Z had previously spoken out to defend his friend.

He said: “What’s happening to Meek Mill is just one example of how our criminal justice system entraps and harasses hundreds of thousands of black people every day.

“I saw this up close when I was growing up in Brooklyn during the 1970s and 1980s. Instead of a second chance, probation ends up being a land mine, with a random misstep bringing consequences greater than the crime. A person on probation can end up in jail over a technical violation like ­missing a curfew.”