Lots Of Praise and Worship at Labour Day Concert 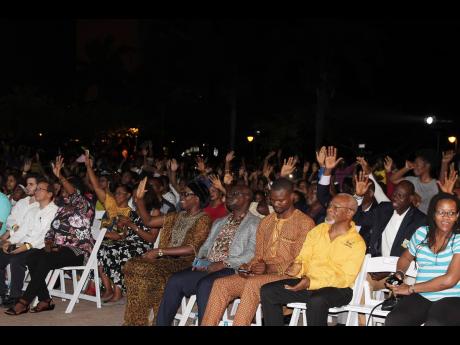 Stephanie Lyew
A section of the audience at the Labour Day 2019 Praise and Worship Concert hold their hands to the sky as an affirmation to God’s presence. 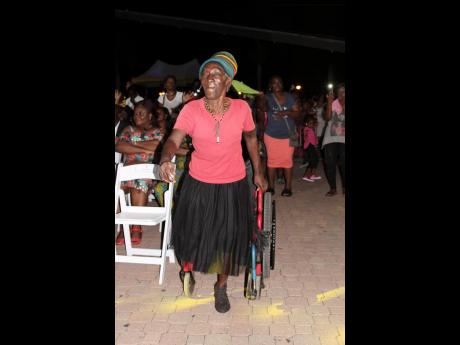 Stephanie Lyew
Claire Reid did not allow her disability to stop her from grooving to the gospel at the Labour Day Praise and Worship concert on Thursday. 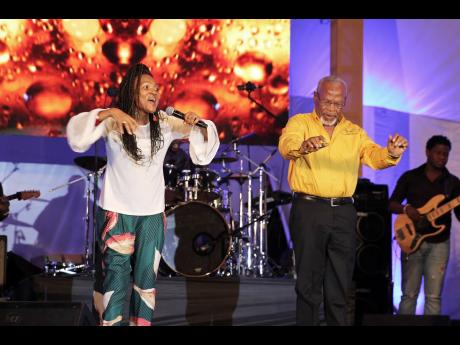 Stephanie Lyew
Dr Carlene Davis is joined on stage by JCDC board member Silvera Castro, who shows her up with his dance moves. 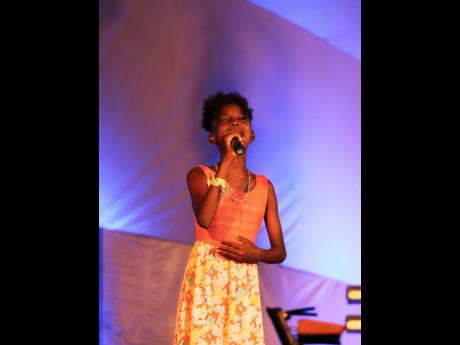 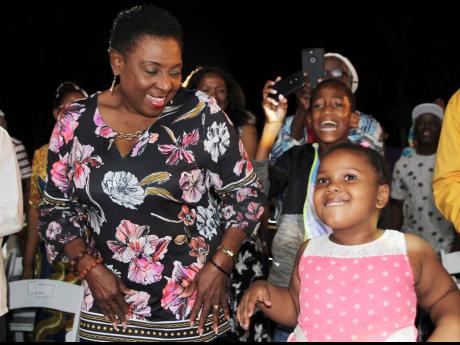 Stephanie Lyew
Minister Olivia ‘Babsy’ Grange enjoys rocking to the gospel as she is joined by Ishmael Davis and Carlicia Attencio. 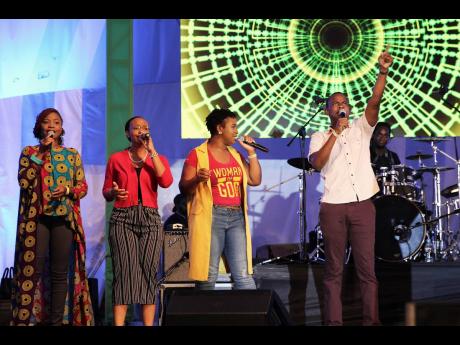 Like Labour Day projects, gospel is participatory, and a gospel concert has more to do with galvanising the audience than with the individual entertainers or songs. Last Thursday’s Praise and Worship Concert, presented by the Ministry of Culture, Gender, Entertainment and Sport and its sponsors, certainly got the support from the public, who participated in the singing of the gospel at the Emancipation Park.

In addition to those who planned to attend the concert, persons who frequent the park for exercise and recreation joined in the praise. Ann-Marie McCray, who came to the Emancipation Park with the intention of doing her daily jog around the park, told The Gleaner that the vocals of the gospel entertainers transcended the music which was playing through her earphones.

“I could not pass up the chance to see some of my favourite praise and worship entertainers perform live, and for free. It would be good to see this support at the paid ­gospel shows,” McCray said.

Other members of the audience shared similar sentiments and also commended the effort of Minister Olivia Grange and her team for bringing a dynamic list of gospel music ministers together to pray for the country. The line-up mingled long-time performers such as Carlene Davis and Sister Patt, with younger ones, some of whom are steeped in current reggae, ­dancehall and R&B. Gospel newcomer Rian Davis, the controversial gospel deejay Chozenn, and the soul-stirring singer Carey Sayles, groups Perpetual Sounds of Praise and Radical Weapon were among other remarkable performers.

Songs like You Deserve It, Handful of Salt and Wings of a Dove performed by Carlene Davis kick-started the evening’s session of worship.

Children’s Gospel Song 2017 Competition 6-10 category winner Maylyn Dillon, and 11-15 winner, Taville Henry; along with the competition’s 2018 winner, Janae McLymont, were part of the line-up, and this was especially appropriate since the theme was ‘Children’s Safety … It’s you, it’s me, it’s all ah we’.

Tears literally flowed from those in attendance as the young singers, who upon their individual introductions were soft-spoken, ended up delivering earth-shaking performances.

The final four performers of the evening, Chozenn, Wayne Marshall, Jermaine Edwards and closing act, Sister Patt, were a fantastic end to the evening, as the entertainers shared testimonials, sang, preached and sang some more.

Chozenn brought his usual forceful attitude to the fore. He shared his discontent about violence against children, making mention of Shantae Skyers, and pleading with the public to stand up for children’s rights just before performing the parting song, the controversial single Bawl Out. Wayne Marshall’s entrance was an energetic chant of his 2003 positive dancehall single Overcome, which the audience repeated word for word, and of course he could not exit without sharing Glory to God, and Jermaine Edwards declared that it was indeed a Beautiful Day when he sang the single titled same.

Soon the concert was drawing to an end but the audience was just getting footloose and ready to groove to the gospel when Sister Patt drew for her single Massa God Ah God to close her set. Folk dancer Claire Reid, an amputee who has had to rely on a wheelchair since the late ’90s, was one of the members of the audience that could not resist getting up and dancing to the sounds of praise. Encouraged by Reid after she stole some of the attention from the gospel singer, virtually the entire Emancipation Park rose to its feet to clap their hands, stomp their feet and rock to the mento beat of the song.