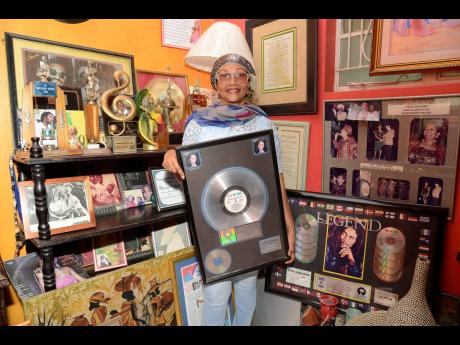 Ian Allen
Marcia Griffiths shows off some of the many awards she has won throughout the years. 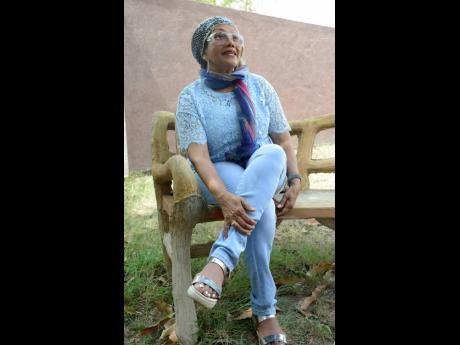 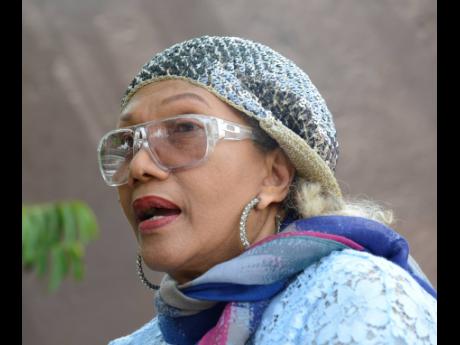 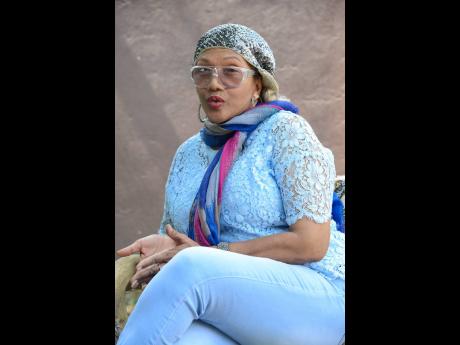 When a young, impressionable, ingénue named Marcia Griffiths set off on her journey in reggae music, she had no idea whatsoever that half a century later, she would be living the words of her own song, which has become an anthem: “ I shall sing, as long as I live/As long as I live, I shall sing.”

The reigning and only Queen of Reggae, Marcia Llyneth Griffiths, OD (Commander class), is celebrating an illustrious 55 years in a business that has truly been kind to her. And, at 69 years young, this legend, who has literally lost track of the number of albums she has released, is gifting the world with yet another captivating new album, appropriately entitled Timeless. With one single, What Kind of World, already out, fans are anticipating the June 14 release of this Donovan Germain-produced album, which pays tribute to another timeless entity, Studio One, the Jamaican Motown. But, prior to that, her European tour “Marcia Griffiths Celebrating 55 Years Timelessly”, is scheduled to kick off on June 7 in Zurich, Switzerland, and the long list of stops is sure to make one breathless – Italy, Copenhagen, Austria, France, Geel Reggae Festival in Belgium with Buju Banton; in the UK at Boomtown Festival in Winchester, Birmingham, and Brixton Academy with Supercat; and Rototom Sunsplash in Benecassim Spain, among others. Additionally, the woman who delivers what one writer terms “strong, smooth-as-mousse love songs,” only recently returned from a two-week trip to Germany, where she appeared in a series of sold-out shows alongside German reggae singer, Gentleman, who Marcia described to The Sunday Gleaner as “a real gentleman”.

As dizzying as Marcia Griffiths’ tour schedule may sound, it takes on a whole new meaning when one realises that this frequent flyer has a desperate fear of flying. “I am on the plane screaming and the flight attendant is trying to calm me down, only for her to be told that I have probably flown more miles than she has. But I fret every time I have to go on a plane. And I cannot sleep. I have to be wide awake the entire time, no matter how long the journey is. I know it’s not good for me,” she said. “But the show must go on,”says the reggae singer who continues to tour the world and dazzle fans with mesmerising performance

Hers is undoubtedly a timeless story, suffused with incredulity, and is the stuff of which legends are created. And while her luck, if you can call it that, at having rubbed shoulders and shared the stage with reggae icon Bob Marley is a chunk of her story, being one-third of the I-Three is by no means this “dawta’s” entire story. She enjoyed exceptional, chart-topping, success as part of the talented duo, Bob and Marcia, whose union produced hits such as the socially conscious Young Gifted And Black, which muscled its way to number two on the powerful British charts and saw them appearing on BBC’s Top of The Pops.

“The Bob (Andy) and Marcia years were great, and it was amazing how things just fell into place,” she reminisced. “ I had signed a contract with one Mr Huber in Germany, only for me to reach England and hear of the success of Young Gifted And Black and that we were invited to do Top of The Pops. I was in a dilemma because that was a very big deal and I wanted to do the show, but I also needed to go to Germany and honour my contract. Anyway, I did the show,” she recalled, with a laugh, still amazed at her courageous decision decades ago. “As you can imagine, Mr Huber was not happy, and he made it known in no uncertain manner. But he was a really nice man, and I soon left England and went to Germany.”

As a solo artiste, Marcia Griffiths’ trail-blazing efforts resulted in a trailer load of singles such as Stepping Outa Babylon and D reamland, followed by the Bunny Wailer-written Electric Boogie in 1983. The age-defying song and dance electrified the world and went viral long before the term viral was even a thought. Marcia describes her amazement at seeing an entire stadium in Europe moving in unison to her song. “I was stunned. It was like a wave. Everybody was doing this dance.”

Of her Bob Marley years, Marcia is the first person to shout to the world just how special Bob Marley was. “When I saw how serious this man was about the music, it gave me a whole new perspective. Bob opened up my eyes to not just the fun and dance, but the message in the music.” She describes the death of the reggae icon as devastating. “We were all unprepared. We never expected it. We had gone on to a show, and we were expecting him to join us, but things happen,” she said quietly.

“I am glad I gave him flowers while he was alive,” she says, her voice happy, while her eyes reflected a tinge of sadness.

It is said that Marcia Griffiths, a role model and a style icon, remains in demand because of her crossover appeal to both mature and young fans. “She covers the spectrum of reggae. Even on this new album, she does collaborations with a lot of younger artistes like Romain Virgo and Busy Signal, so she is still in demand,” her manager, Copeland Forbes, is quoted as saying.

Timeless, which covers a wide range of artistes/songs, from Delroy Wilson’s Once U p On A Time to The Heptones Baby Be True, Peter Tosh’s I’m The Toughest and The Abyssinians’ Declaration Of Rights, plus a ska medley inclusive of Jackie Opel, Toots Hibbert, The Wailers, and Rita Marley, is described quite aptly as “a timeless voice, echoing a timeless era that will certainly help drive the revival of popular reggae music.”