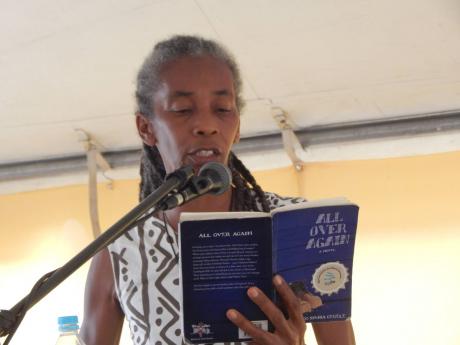 Michael Reckord
Author and poet A-dZiko Simba Gegele reading from her award-winning novel ‘All Over Again’ at Talking Tree.

In just six hours, a surprisingly varied performance package was offered at the Talking Trees Literary Fiesta in Treasure Beach, St Elizabeth, last Saturday. It was the sixth fiesta, presented by the Two Seasons Guest House in collaboration with the Department of Literatures in English at The University of the West Indies (UWI), Mona, and the Gloria Lyn Memorial Fund.

Most of the presentations were literary readings, which included the works of three recently deceased well-known authors, new poets reading their own works, and open-mic sessions of performance poetry. The sole contributor in the area of non-fiction was business consultant Marguerite Orane, who read from her second book of essays, Forget It! What’s the Point?

There was also a humorous 10-minute play directed by Pierre Lemaire, lecturer at the School of Drama at the Edna Manley College of the Visual and Performing Arts, starring graduates Lemar Archer and Rajeave Mattis; a performance by a children’s speech choir of a poem about the fiesta that they had written hours before; and live music played between the oral presentations. Not to be left out as a performer, the witty, informative master of ceremonies, Fabian Thomas, also read a number of his own poems. These activities took place in a large white tent erected in the centre of the red-and-white bougainvillea-lined grounds, but there were other attractions to be enjoyed outside of its shade. To one side, under a lignum vitae tree, was an area for children’s play, beside which 54-year-old calabash carver Albert Jonas exhibited his beautiful art pieces. He told me he had been carving since 1984, occasionally exhibited at Devon House, and owned a gallery in Irish Town. On the other side of the big tent were smaller ones where food, drink and clothing could be purchased.

Saturday’s programme began with a welcome by head of the literature department at The UWI, Rachel Mosely-Wood, before the readings by three well-known personalities in the field of literature from the works of recently deceased writers. They were Professor Emeritus Mervyn Morris (reading V. S. Naipaul’s Man Man from the collection Miguel Street); former head of the Department of Literatures in English, Dr Michael Bucknor (reading from Garfield Ellis’ novel Such As I Have), and publisher Tanya Batson-Savege (reading an excerpt from Hazel Campbell’s Miss Betina’s House).

Two overseas-based writers who came to Jamaica specifically to read at Talking Trees were Brandon Wint from Canada, whose father is Jamaican, and Sharma Taylor, a Jamaican working in Barbados, who stated, “I’m a lawyer by profession and a writer by passion.” The poems by both were excellent, and when Taylor told the audience that she was “blown away by the poems of the young people”, she was summing up the general feeling about the high quality of all the presentations. This included pieces on a wide range of domestic and social issues delivered by the seven of eight poets in the open-mic segments.

The icing on the rich performance cake came from four award-winning, internationally acclaimed writers, three of whom were educators and one who is also a performer. The latter, A-dZiko Simba Gegele, read with so much passion from her book, All Over Again, about two boys arm-wrestling that she fainted at the end of her reading.

The others were novelist and short-story writer Curdella Forbes, a lecturer at Howard University; Jamaica’s poet laureate, Lorna Goodison, and journalist-author-artist Alecia McKenzie, who teaches creative writing in Paris, France. Forbes read an excerpt from one of her novels about a tense meeting at an airport between two friends. Goodison, who explained that one of her duties as poet laureate was to encourage young people to appreciate and write poetry, read a number of her family-centred poems. And from her earliest collection of short stories, Satellite City and Other Stories , McKenzie read a story written as an exchange of letters in which a grandmother urges her granddaughter to reunite with her estranged mother.

Scheduled for the second day of the fiesta was a poetry-writing workshop led by Goodison. The 20-person limit was reached well before the first day, which formally ended with music by a band of young musicians, Mad Yardies.