Ken Boothe honoured at launch of ‘My Iconic Musical Journey’ 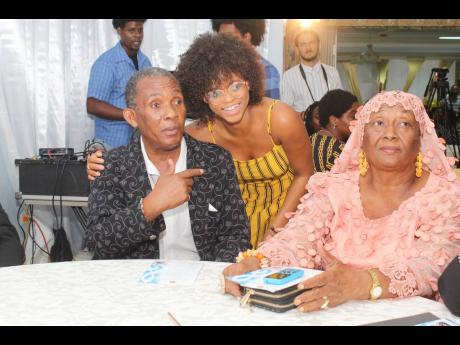 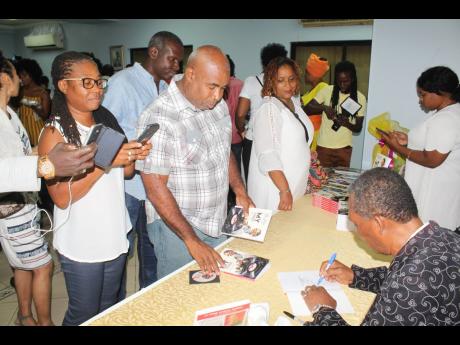 Contributed
Ken Boothe signs copies of his book at the launch at the Mona Visitors’ Lodge on Sunday. 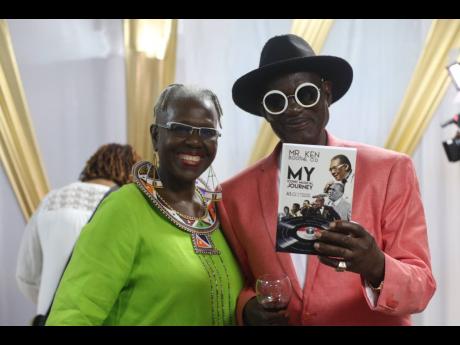 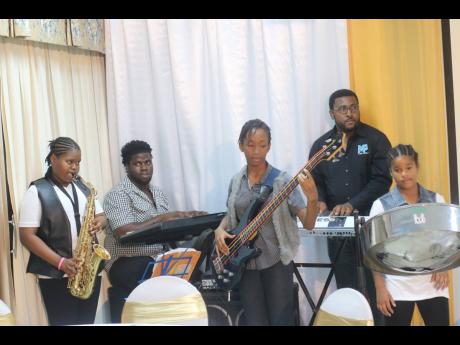 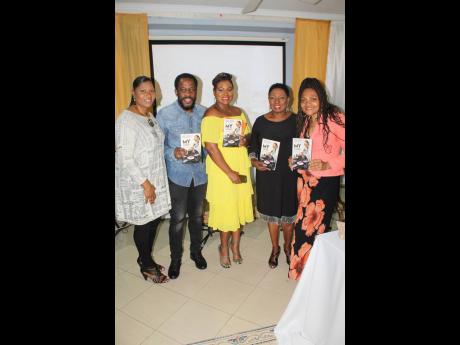 Select passages read by entertainers Wayne Marshall and Carlene Davis, along with the honoree’s manager, Philip Clarke, gave insight into the personality, trials, joys and struggles of legendary Jamaican rocksteady and reggae singer, Ken Boothe. Nestled within the pages of My Iconic Musical Journey, which had its official launch last Sunday at Mona Visitors’ Lodge, are historical, hilarious and intriguing events chronicling the life of Mr Rocksteady himself.

It was by design rather than chance that the past, present and future held hands at the launch, which saw Boothe’s peers, a representative of the current crop of reggae revival singer, and children all paying tribute to the icon. “We wanted to get a cross-section of persons here for this book launch and to honour Ken in a special way,” Ingrid Larmond of Pageturner Publishers told The Gleaner. “It is important to Ken, and to us, that the next generation is involved and that they understand our great musical legacy, and that is why this book is so important.”

Students from the Red Hills Road-based St Richard’s Primary School lauded Boothe, and they let their instruments do the talking as they strummed their way through a medley of his hits songs. It was clear that the Freedom Street singer was impressed, and afterwards, the children were seen delightedly taking pictures with the man of the moment.

Also joining the happy crew of tribute-bearers was a representative of the reggae revivalists. A beaming Lila Ike, looking svelte and sounding almost sultry, thrilled the audience as she strummed her guitar and belted out her interpretation of a Ken Boothe classic. In fact, she confessed that when asked to pay tribute to Boothe by singing one of his songs, “I had a little problem trying to choose my favourite Ken Boothe [song] .”

She eventually chose Artibella – a pretty wise choice, considering the impact she made. She was so good that Boothe himself is now looking forward to her doing a cover of the chartbuster.

Gospel singer, Minister Carlene Davis lavished praise on her friend of many years and told him how happy she was that he had written his book. They performed a gospel song, Why Me Lord, a cover they had collaborated on many years ago, and which was featured on Davis’ 1992 gospel reggae album, Jesus Is Only A Prayer Away. Although they hadn’t rehearsed, Ken insisted on doing the song, so with cellphones as their lyrics books, the veterans delivered.

Among those honouring Boothe when the floor was opened was legendary producer Winston ‘Niney’ Holness, Ken’s long-time friend and partner in crime, whose honesty about their escapades nearly got Ken in trouble with Mrs Boothe. “But that was a long time ago,” a not-so-penitent Niney insisted as the audience reacted with either astonishment or laughter.

Earlier in the evening, Minister of Culture, Gender, Entertainment and Sport, Olivia ‘Babsy’ Grange, who also writes the opening tribute in the book, had her very personal say. It was as if she were having a one-on-one conversation with Boothe, the artiste whom she once managed. She took him and all those in attendance on a stroll down memory lane and reminded him of the good times and the not-so-good times. But the real theme of her talk was the pride and joy she felt in playing a role in his iconic musical journey.