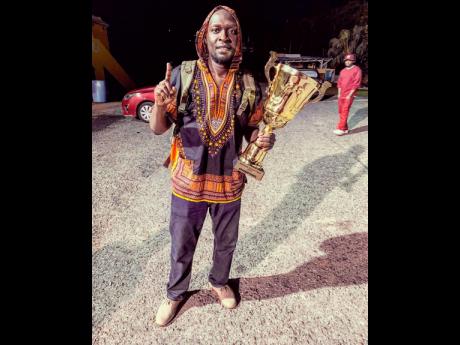 Perhaps the first fascinating thing that anybody will learn about award-winning, sound system selector Dynamq is that he’s a refugee. And just for clarity, he is a real-life refugee from the Sudan.

Dynamq, who refers to himself as The Sudanese Child or the not-so-complimentary-sounding River Nile Crocodile, grew up in a refugee camp in Kenya, having had to flee the civil war in his native Sudan. However, it was while at the camp that he first connected with Jamaican music.

“A friend from India had a boom box with a cassette that he would play all the time,” he said. One of the songs was Israelites by Desmond Dekker, and it connected with his soul and gave him hope. “As the song says, once you get up in the morning, it means that you have life, and you have to make the best choices what to do with that life,” Dynamq said.

He explained that in a sense, living in a refugee camp represented a choice. “The only way out of Kenya and the refugee camp was via a system similar to a green card lottery. And you had to actually be living at the camp to qualify. My brother got chosen first, and he was sent to the United States. Within a year, he was able to get his application for my mother and other siblings approved, and we were on our way to Pennsylvania in America. We had to learn to adjust to a whole new lifestyle,” he told The Sunday Gleaner. “It was a day-to-night change.”

But Dynamq was ready to embrace any and all challenges, and it is undoubtedly this attitude, and, of course, his agility and predatory Nile crocodile instinct, that give him the edge in the competitive world of sound systems. The reigning Irish and Chin US Rumble champion, he considers himself a student of the music, and says his first teacher was his late father. “My father would play records from old African bands, and this awakened my love for music. Also, me and my friends would listen to podcasts from David Rodigan, and the song lyrics and the emotion in the voices of the Jamaica singers, it’s as if they were telling my struggles.”

It was perhaps inevitable, therefore, that his life would somehow become intertwined with the vibrant Jamaican music culture. What has evolved through this connection is “Ruka”, Dynamq’s melting pot of music that blends reggae with the native sounds of South Sudan. In April, Dynamiq touched down in the Far East for his ‘Japan Ruka Tour’, which saw him pleasing fans in Osaka, Kobe, Sendai, Kawasaki, and Tokyo.

“It was amazing!” a delighted Dynamq told The Sunday Gleaner. “Can you believe that fans even put on Dashikis to match mine when I was playing because I always play in my African gear. I witnessed a genuine love of reggae music and sound-system culture.”

Some may say that Dynamq is currently at the top of his game given the many awards he has won. In addition to being the reigning Rumble champion, he holds the Bermuda Triangle champion title; he made it to the semi-finals in the popular Boom Clash in Jamaica; and just recently, the River Nile Crocodile and Jamie Hype from Young Hawk sound formed Team USA to compete in, and win, the famous War Ina East championship.

“On April 20, we went to Dartmund in Germany for War Ina East 2019,” he recounted. “This was special because I went with Jamie Hype, the same person who had encouraged me to participate in the World Clash, when I thought I wouldn’t have been given a chance on that stage. Well, I won the World Clash, and I am forever grateful to Jamie Hype for believing in me and also to Irish and Chin for giving me the chance. So this win, with my friend Jamie, was special,” he said.

Speaking briefly on some of the high points in his career, Dynamiq said the biggest forward he has received was when he played at World Clash Canada in 2018. “That was about the time that Canada had just freed up marijuana, and I got a Tony Rebel dubplate the day of the show. ‘Help me big up Canada, dem just legalise marijuana,’ Tony Rebel’s voiced roared through the venue. I got scared when I heard the forward – it was the biggest forward of my entire life,” he said.

Immensely proud of his Latuko heritage, and despite having to flee his country, he has held fast to the customs. “My tribe is Latuko. And we believe that once you get to the top, it is your duty to bring others up there with you,” he explained. As a result, he has an ongoing project in Sudan where he helps the youth, and he is preparing to launch a TV show in South Sudan.

Dynamq, who is gearing up to embark on a European tour, is also set to defend his title at US Rumble on June 29 at Garage in Bronx, New York, and all eyes are on him to land another historic victory. However, he confesses that he is still amazed that he actually “gets paid for doing this thing”, which is his passion.

Dynamq credits Japanese sound system Mighty Crown, for showing him that it is okay to be non-Jamaican and play reggae and dancehall music. And about the music that he plays, he had this to say, “I continue to be amazed at how a small country like Jamaica can influence the whole world.”