The nights are better with Air Supply, Third World 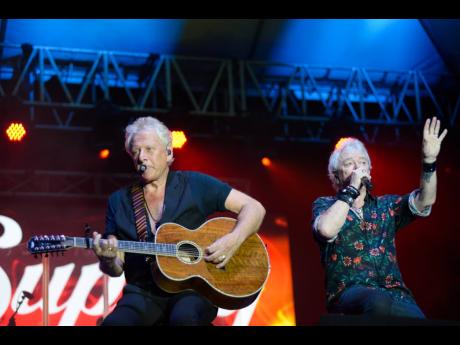 At least 2,000 patrons were treated to world class entertainment in the name of charity at the second biennial An Evening with Air Supply and Third World. Their voices filled the lawns of the Couples San Souci resort in Ocho Rios, St Ann, as the soft-rock Australian duo, comprising Graham Russell and Russell Hitchcock, belted out hits from a catalogue spanning over four decades.

They are certainly not strangers to Jamaica; the event saw their return as goodwill ambassadors for the Issa Trust Foundation (ITF), organisers of the event.

An expected US$200,000 in proceeds will go in aid of the paediatric wards of the Annotto Bay and Savanna-la-Mar hospitals.

“I thought it was a great night. It’s all about the children, and we do just the best we can to raise money for the children,” Graham Russell told The Gleaner. “It’s nice to come in and not get paid for a change. When you donate everything, it makes you feel good, and the place was sold out, so we’re going to raise a lot of money, which is what it’s all about.”

During their performance, Graham revealed that he would be auctioning his 15-year-old guitar for the initiative, but not before the famed rock band thrilled with classics such as Sweet Dreams, Every Woman in the World and Even the Nights are Better.

Guests were taken on a trip down under to Air Supply’s earlier days, or, as Graham put it, “when it was just one guitar, two voices and a piano”, starting with their 1982 hit Two Less Lonely People in The World during a seated-performance. Giddy screams erupted when the duo abandoned the stage to walk through the crowd, with Graham’s powerhouse vocals leading Here I Am and Graham’s serenading skills on guitar.

The production heightened with the two most fan-requested songs, Making Love Out of Nothing At All and All Out of Love, before the duo exited the stage for what appeared to be the glorious end to a 60-minute set and philanthropic evening. Fans, however, could not get enough and called for an encore, to which Air Supply responded by returning with a few more numbers.

“We had a great time. It’s a beautiful place and there are no downsides to performing in Jamaica,” Graham said. “I don’t know if we’ll be performing again in 2021 as we haven’t spoken about that yet, but we would definitely like to come back again if we’re still kicking, and we will be.”

The paediatric ward at the St Ann’s Bay Hospital was the 2017 beneficiary, and based on a recent visit Graham voiced satisfaction with the improvements made at the facility through proceeds from the inaugural show.

Consultant paediatrician and head of the paediatric department at the Savanna-la-Mar hospital, Dr Ludrick Morris, told The Gleaner that donations will go a far way in expanding the ward and sourcing equipment , including monitors, ventilators and infusion pumps.

“ITF has been a true partner, and one of the things that we appreciate is the fact that they don’t just donate equipment, but they provide biomedical support by fixing them when they break so they don’t lie around useless,” he said.

Also sending kudos to the foundation were Third World in their musical showcase. Founding member and guitarist/cellist Stephen ‘Cat’ Coore dubbed the organisation “freedom fighters” and said it was a no-brainer supporting the cause.

“We really love the fact that they engaged us ‘cause we enjoyed ourselves, and we are proud to be associated with them,” he said.”It was fabulous, we really enjoyed it a 100 per cent.”

So, too, did fans, as the group pulled out all the stops to show why they have been in the business for 45 years. Their expansive catalogue, including Now That We Found Love, Reggae Ambassador and Reggae Party, kept patrons dancing and cheering, which continued when lead singer AJ Brown walked through the crowd, spreading their celebratory spirit.

He received a standing ovation for his impressive rendition of opera singer Andrea Bocelli’s Time To Say Goodbye following a spine-quivering solo piece showing the musical genius of Coore. The band also brought on violinist Dr Jessica Yap, who paid a spritely ska tribute to late former Prime Minister Edward Seaga, who was instrumental in the genre’s development in the 1960s. Seaga died at a North American hospital last month at age 89.

Also on the roster was 19-year-old sensation Koffee, whose set, inclusive of Rapture, Toast, Raggamuffin and Burnin’, proved to be a breath of fresh air.

ITF president Diane Pollard, beamed when asked about the evening.

“People came out to support the kids and make a difference and I love the support,” she told The Gleaner. “When you see a crowd like this here to support the kids, it is humbling, and we’re very grateful. The prime minister is also here with Mrs Holness. Lady Allen is here as well, so we’re thankful, because they could be anywhere else but chose to be here, so it says a lot about the talent on the show and the foundation’s aim.”