‘Pokémon Detective Pikachu’ – My furry friend and me 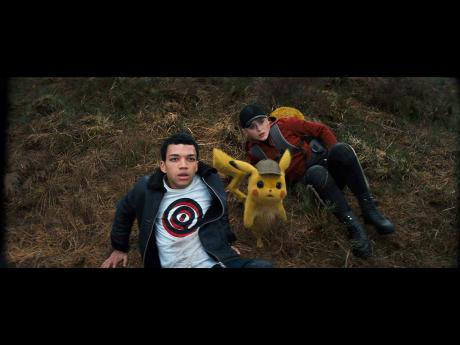 Pokémon is a beloved property the world over. It takes a simple concept, the combination of a young adventurer and his super powered companion, who set off on an adventure full of danger, thrills, and the occasional touching moment. Thus far, though, the series has yet to make the leap to live action films, which, of course, means it’s yet to be taken seriously by those who dismiss it based on its origins in animation and video games. Perhaps Pokémon Detective Pikachu will earn the creatures a seat at the big table.

As it starts, the film definitely takes itself more seriously than one might expect. Young Tim Goodman, played by Justice Smith, is grieving the loss of his estranged father Harry, when he happens upon his father’s Pokémon, a Pikachu with a Sherlockian hat and a penchant for caffeine. To Tim’s surprise, he’s able to have fully fledged conversations with Pikachu. Whereas normally, the creature would be limited in a Groot-like fashion to repeating “Pikachu”, he’s now able to sound like Ryan Reynolds doing a mild version of Deadpool dialogue. Together, the two try and solve the mystery of Harry’s murder – who may, in fact, not be dead after all.

I quite liked how Detective Pikachu was able to ease viewers into this fantastical world. You’re eased into a world that looks not unlike our own, but the birds chirping and frogs leaping through a stream are replaced with their poke-equivalents. Towards the middle of the film, Tim and Pikachu are in Ryme City, a Pokémon-human utopia, where the frame could have at least a dozen different Pokémon ready to be spotted by the eagle-eyed viewer. It’s not unlike the world of Who Framed Roger Rabbit. The similarities are no mistake. Detective Pikachu wears its influences on its sleeve, and has the sensibilities of a Stephen Spielberg-produced picture.

At the heart of the film is the duo of Reynolds and Smith. The two deliver some really moving drama, which is a welcome break from a barrage of jokes that don’t always land. There are a few pacing issues. The first two acts take their time, a little too much of it, resulting in a third act that feels rushed. Still, for the trouble it has telling its story, its world and its characters make up for it in spades.