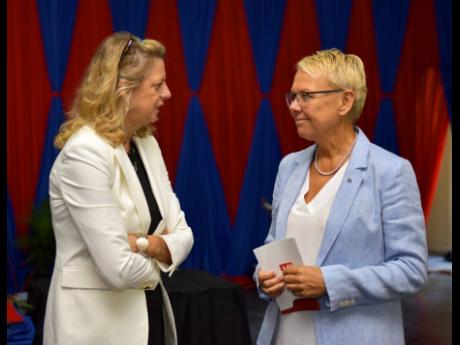 The European Union Film Festival is back for 2019, and in addition to the usual screenings in the Corporate Area, this year films will be shown in St Elizabeth and St James.

The films will cover a variety of issues, including immigration, discrimination, love, women in sports, persons with disabilities and diversity, among others.

The festival opened on Monday, at the Spanish Court Hotel, with a screening of the 2019 Polish film Zimna Wojna (Cold War), which follows the story of a couple from contrasting backgrounds in Cold War Poland, Germany and France, seeking an impossible romance.

EU Ambassador to Jamaica Malgorzata Wasilewska says the festival is a celebration of the richness and diversity of European culture.

“It offers an opportunity for us to share a taste of Europe through a variety of films and their explorations. We hope that in this way, we can foster improved understanding of Europe among Jamaicans.”

She continued, “Organising this important event takes a lot of hands and I am grateful for the support we have had to make this happen. The Missions of EU Member States are joint partners. In addition, we have had a lot of assistance from the EU Honorary Consuls in Jamaica, Jamaican film authorities, Phase Three Productions, Round Hill Hotels and Villas, Jack Sprat Restaurant and some of the leading educational institutions all on board for what will be an amazing culturally immersive experience.

“I am really excited that we have added Treasure Beach and Montego Bay to our schedule this year. We want to reach beyond Kingston to bring EU films to a wider cross section of Jamaicans.”

The festival is hosted jointly by the EU Delegation to Jamaica and EU member states.

It continues tonight with the German film, Ich Und Kaminski/Me and Kaminski at The Mico University College, before moving to St Elizabeth for the showing of Irish film, The Drummer & the Keeper, at Jack Sprat Restaurant while in the Corporate Area, the Italian film A Ciambra will be a the University of Technology.