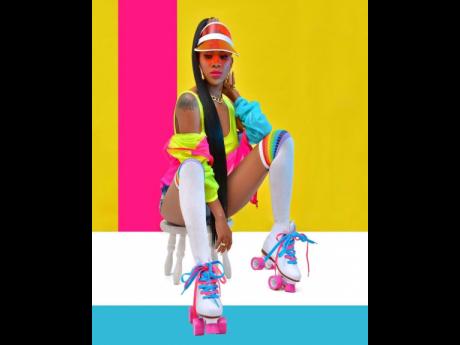 Jamaican entertainer Vanessa Bling has been enjoying chart success lately, with her third EP Still Standing re-entering the reggae album Billboard chart, after peaking at number three when released last September. The Independent Ladies singer is also featured on American singer Rotimi’s Walk With Me EP, which debuted at number one on the R&B Itunes last Friday. Vanessa Bling is the sole feature on the seven-track project, on the sensual Afrobeats track Push Button Start. Speaking to The Gleaner, she revealed that the song was recorded in New York last year, and she was pleasantly surprised that it was used as part of the project.

“We linked up at the studio and I thought it was just going to be a regular single. As you hear the song you notice I went very raw and kept it authentic and Jamaican, so I didn’t even know he was gonna use it on his album,” she stated.

“When I got the call that the song that we did is the only collaboration they are using on the album I was so grateful, then his album automatically went number one after, I’m just really grateful to be part of that,” she continued.

Bling said she first encountered the Starz Power actor after performing at an event in New York last year, and the two later exchanged words at another event in Atlanta. Walk With Me explores Rotimi’s Nigerian roots, and is heavily infused with Afrobeats, R&B, dancehall and island-pop sounds. It currently sits at number two on the R&B Itunes charts, behind Khalid’s Free Spirit.

Push Button Start comes at a time when more local acts are increasingly teaming up with American artistes for hybrids numbers, the latest being Shenseea and Tyga on the single Blessed. Bling did not dismiss the idea of dancehall taking a more commercial sound and turn, but did highlight that collaborating with international atistes is not new in the dancehall/reggae space.

“It has been around for a long time. When you look at artistes like Sean Paul, Shaggy and Vybz Kartel, all of them do it before so it’s just up to us to continue doing great music and stop acting crazy, stop doing unnecessary stuff for attention and just focus on doing music,” she said. “International artistes really love Jamaica, so all we gotta do is be we self, we don’t have to do anything extra because dem love Jamaicans. Just do good music, somebody will recognise it.”

She prides herself on being a lover of her craft and never a leech for fame, which is supported by her longevity in the business. She emerged as Gaza Slim almost a decade ago, and has built a repertoire solid enough to make her the only female performer at Sunday’s Best of the Best concert in Miami, Florida. For Bling, her strides are consistent because of her humility and work ethic.

“I always tell people I work in silence and I always remain humble, do my thing, trust God and let Him work,” she said. “I’m not here for the fame or hype, I’m here to do music so you can love it, and your great grandkids can love it. Vanessa is doing a lot of great things but I guess because Vanessa is not in the hype most people not gonna run with it but it’s okay. I’ll continue to let my work speak for me ‘cause we’re in it for the long haul.”