Women in jazz are here to stay 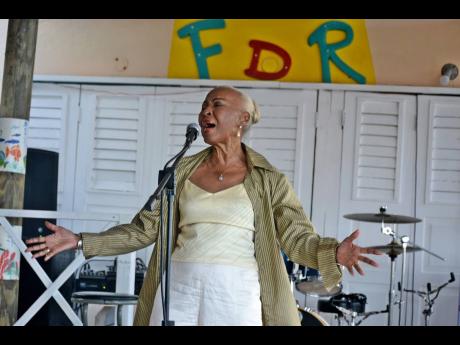 Women in jazz, the theme for the 2019 edition of the Jamaica Ocho Rios International Jazz Festival, which began at Franklyn D Resort in Runaway Bay on Sunday, is meant to be more than just a premise.

Singer extraordinaire and show promoter, Myrna Hague, in expressing pleasure at the performances of the women on the opening programme (Chetenge and Pat Braxton, and not excluding herself and Marjorie Whylie), said women are indeed holding their own in jazz.

“They brought a certain intimacy and a certain level of confidence and power, not standing behind the men and waiting, but coming out in full force and showing that they can hold own their own,” Hague told The Gleaner.

“I thought Chetenge held her own in front of that band today like a trooper, and Pat Braxton did the same thing – so women in jazz, we’re here to stay.”

Braxton, from Boston, Massachusetts, and on her first trip to Jamaica, said it was a blessing and a privilege to be performing jazz for audiences all over the world, and here on the island.

Chetenge (Cheryl Clarke) said she first sang jazz over three decades ago, and it was the first genre she was exposed to.

“I feel great representing women in jazz because jazz is not a genre that most women sing. I started singing with a jazz band when I was 20 years old and it’s really a pleasure for me to be representing the women this year. “It’s a humbling experience to be singing since I’ve been 20 and I’m over 50 and still loving it.”

For her part in the genre she says, “Variety. The jazz genre is very wide so I bring variety. I bring the old school jazz, the swing, the bossa nova. I also bring something where I can take a song that is written in common time or two-four or four-four timing and put to jazz. So, I think I brought that element of jazz that people haven’t recognised or discovered yet.”