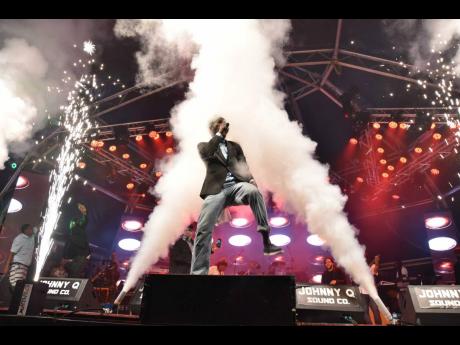 Sizzla Kalonji, whose given name is Miguel Collins, is claiming Victory for 2019. That is the title of his latest album, released digitally on March 18. He describes the 16-track album, produced by Breadback Productions, as “a cultural album – a classic Kalonji album”.

With one Grammy nomination already under his belt, he is hoping this album will add to that number. He has been doing heavy promotion since the start of the year.

And victory seems to be within the grasp of the Thank You Mama singer, who recently collaborated on the single Holy Mountain, featuring Buju Banton and Mavado, on DJ Khaled’s Father of Asahd album. The single debuted at number two on the Billboard 200 Albums chart in May.

Before he hit the stage last night as the headline act for Appleton Estate Signature Night in Clarendon, we caught up with ‘Dada’ for this week’s 5 Questions with ....

1. Of all the songs you have done, is there one that is your favourite or that is special to you?

Holding Firm. With all the negativity that has come my way, with people having a bad heart for me and because of how I have shown the people the right way for their redemption and preservation of our indigenous African culture, I think this song is the best!

2. Outside of Jamaica, where is your favourite place to perform?

Africa – because it is the root and cradle of civilisation. Going to Africa for a performance literally eradicates all ‘junk knowledge’ being placed in one’s head towards the beautiful continent of Africa and Ethiopia.

3. Where is your favourite chill spot on the island, and why?

My home studio in August Town. That is where my parents have lived since my birth, and it’s in a community that I’m deeply ­connected to based on its rich Ethiopian and African history – conscious citizens, ­geographical position and its luscious canopy valleys.

4. When did your passion for motorcycles begin?

From a youth in my father’s garage. I learnt the trade from my dad.

5. What gadget can’t you do without for a weekend?

My cell phone. It’s my main form of communication.